The events next door

For 18 years we have lived next to a house with a large garden. Now the house next door has been demolished, and the land sold to a developer. The developer is building 18 houses there. And "there" is, of course, very near here.

Until a year ago we have enjoyed being next to a grassy area dominated by a line of majestic poplars and weeping willows, which screened us from the road 250 feet away. Thirteen months ago a temporary steel fence went up, and the tree fellers moved in. 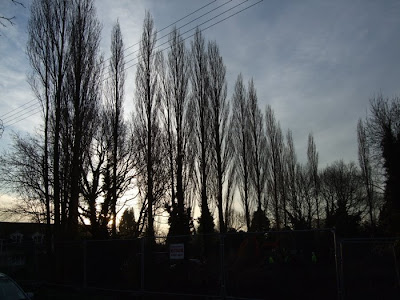 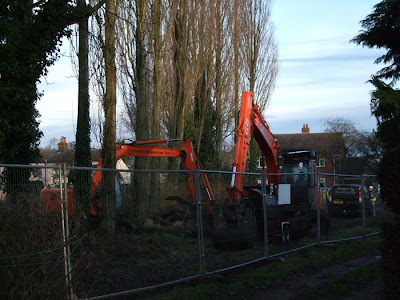 The poplars, a feature of the village for decades, disappeared in days.

Then it was the turn of the demolition gang: Orchard House, which had stood for 150 years, was knocked down in a few hours. 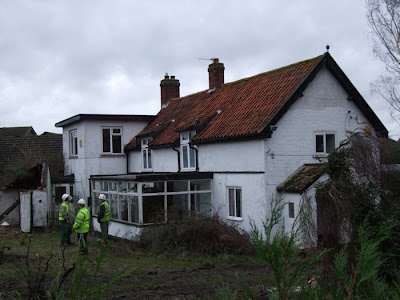 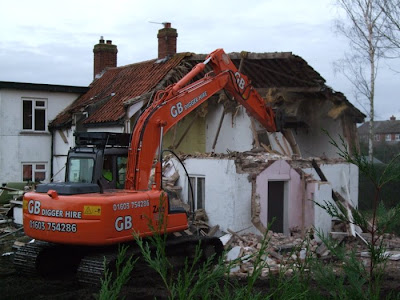 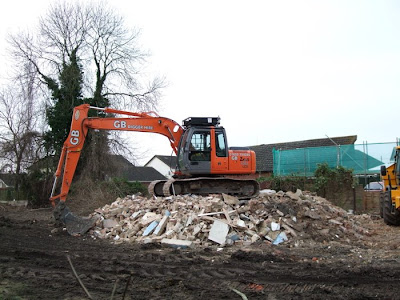 The noise, outside our bedroom window, was bad enough, but then the rubble was loaded onto a conveyor belt and fed into an enormous grinding machine. The din could be heard all over the village. But the tree trashers hadn't finished. The next weeks were filled with the shriek of chainsaws and the rauc of shredders as nearly every tree was cut down. One small positive: I blagged enough logs to keep our woodburner going for a couple of winters. But I would have gladly gone without to keep the status quo. For quite a while after the land was cleared we had a respite from the noise, but then construction began. Every weekday in the summer, and some Saturdays, began with our house being shaken by heavy tracked construction vehicles trundling past our house. The bangs and reversing bleepers usually started at seven o'clock. What I missed most was being able to sit outside with my breakfast with just the sound of the birds around me. Now the birds have lost their homes, and the peace was shattered.
Posted by Halfie at 12:00

halfie that sounds awful, sad too. A similar thing happened to a friend of mine, new houses went up in open countryside behind them, even backing up onto their garden. They felt trapped & moved house, hope it's not that bad for you...

Yes, it's been painful. There's more to come: a house is to be built right next to our back garden, which will block our sunlight in the afternoon/evening.