We made an earlier start than of late (does that make sense?), getting away at 0745. There was still some ice in the canal as we cruised towards Foxton Locks. 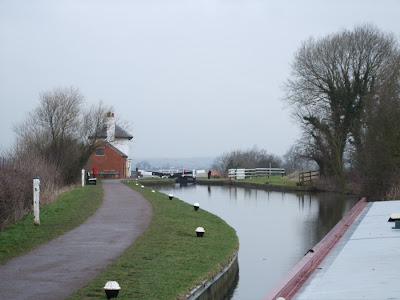 At the top lock we waited for NB Gerald to come up the last staircase of five locks. As I helped the boater through I found out that he was called Roy, and that his air-cooled Lister engine was as old as him. I've recorded their ages as 86, but can that be true? Perhaps I got that wrong, and they are only 82. Gerald is an ex-BCN Joey built 112 years ago. Boat and boatman soon left the top lock, allowing us on Shadow to begin our descent. 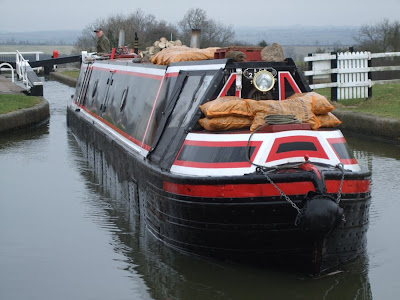 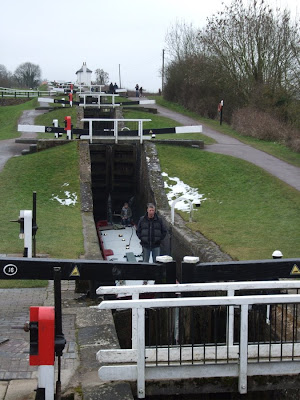 The top lock cottage had a tempting sign advertising an all day breakfast for £3.90 ... but there was work to be done. Down we went, among the customary hordes of gongoozlers. Actually, there aren't many to be seen in the above photo: perhaps 11 o'clock, when I took the photo, was still a bit too early (or they'd hidden behind me).

At the bottom we tied up and explored the site of the inclined plane. 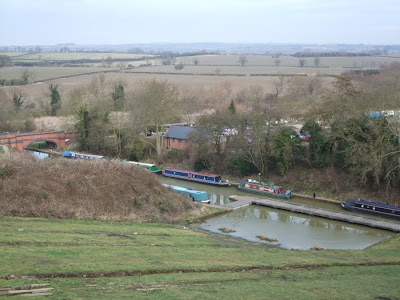 looking down to one of the basins, still with ice on it, and the lower arm

I wanted to have a look round the museum, manned by the Foxton Inclined Plane Trust, but David wasn't that bothered. So while he returned to the boat to make crepes I stayed behind with my bike so I could easily catch up afterwards. The first thing I did was to go to the top lock cafe for that cooked breakfast which had tempted me earlier. It was a pity it came in an expanded polystyrene tray, but I enjoyed eating it sitting outside in the sunshine. Then I looked round the museum and bought a second-hand book (The Water Road) and a second-hand Waterways World magazine before returning along the towpath to find that Shadow hadn't got much past the road swingbridge. 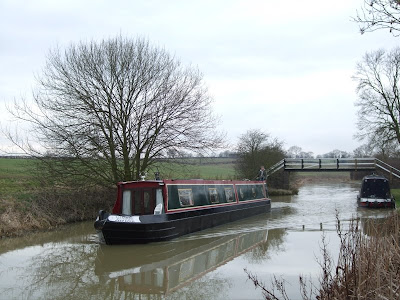 This was the first time I'd been along the Market Harborough Arm: another waterway done. 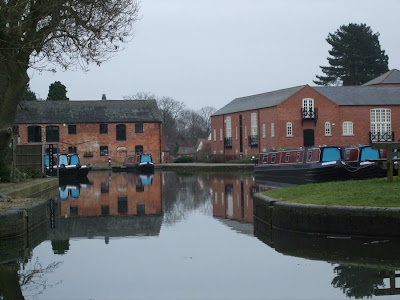 At about 1700 we came to Union Wharf and the basin at the end of the arm. Birds had been singing loudly from the large gardens which meet the canal on the offside.

We were initially unsure about where we should tie up, as each of the two possible spaces had a water point by it. Then we realised that there are water points all along the visitor moorings: an excellent provision!

We walked into the town of Market Harborough. It seems well provided for and with lots of interesting buildings. The Old Grammar School, built in 1614, is next to the church. It was built on stilts to provide shelter for the market traders in times of foul weather. 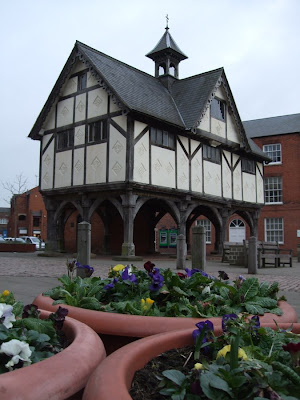 After dark I tried my hand again at some more night photography, aided, as always, by artificial light. 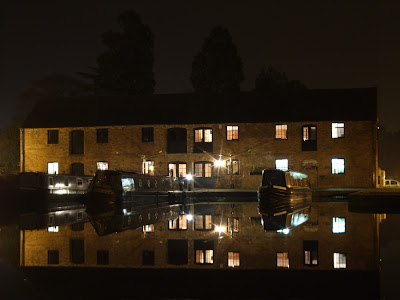 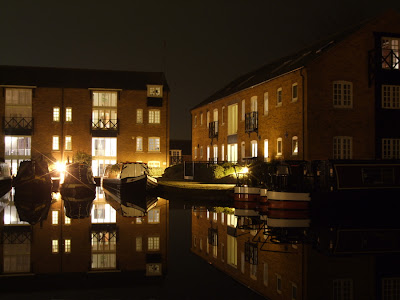 These night shots are really good! No noise at all and lovely and sharp. Well done! What is your camera if I may ask?

Thanks, VallyP. I use a FujiFilm F50fd, a compact digital camera. The longest exposure time it will give is 8 seconds, so you do need quite a bit of light around. I think Andrew Denny of Granny Buttons often exposes up to 30 seconds, enabling him to take good photos in much less light. Go to his recent post on Little More to see a night photo that leaves my attempts in the shade...