David had driven to Stockton Top Marina the previous night, so he and Florence and Fergus had taken Shadow up the Calcutt flight and were making their way along the Grand Union/Oxford Canal towards Braunston. I drove from home to Braunston, got my bike out of the car, and set off down the slippery towpath to meet them. In Braunston itself the snow on the towpath had been compacted by walkers into a rough icy nightmare. I gave up trying to cycle, and pushed instead. After Braunston Turn the snow became easier, but there was another problem. When my front tyre punctured I realised that the hedges had recently been trimmed, leaving thorny twigs all over the place. Having established that Shadow was nearing, I waited at Bridge 99. At about half-past one I hoiked the bike into the well deck and joined the crew.

Cycling along Braunston Puddle Banks I'd noticed a submerged plastic cruiser blocking half the cut. Almost the only evidence for it was some red tarpauline and a bit of chrome bar below the water. Why didn't I take a picture?

I'd left the car by Braunston Bottom Lock, so while the boat was going up I loaded my stuff on board and then drove it into the village. The high street looked a good place to park up, so I left the car there and walked back to Shadow, which was, by now, a couple of locks further up. 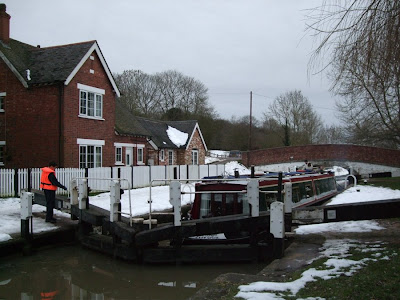 ascending Braunston Top Lock with another boat (with life-jacketed crew)

The land slip at the entrance to Braunston Tunnel presents no problem to a 58 foot narrowboat such as Shadow. I would think even a widebeam would be able to get past with a bit of careful manoeuvring. 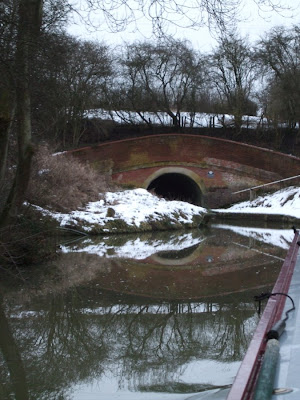 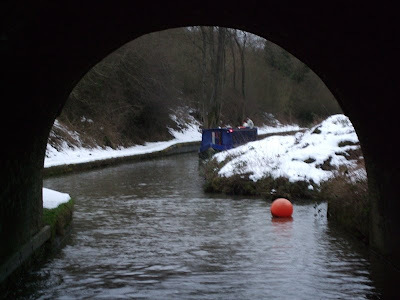 looking back to the land slip

There had been no ice at the Braunston end of the tunnel, but we emerged the other side in the gathering gloom to patches of ice floating in the canal. As we neared Norton Junction the ice thickened. We struggled to get in to the bank to tie up for the night, breaking the ice with the shaft and pushing it out of the way. Unfortunately the original shaft broke in two during this exercise. Perhaps it was already known that it was weak, for on the roof was a spare, unpainted, shaft. 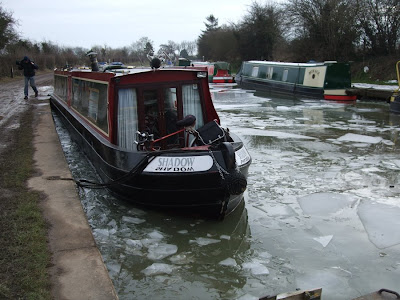 where we tied up for the night (illegally) on a BW workboat mooring (photo taken the next morning when the ice had thinned a bit)
Posted by Halfie at 08:56