The church just behind where we are staying had just one service yesterday - at 8.00am. We didn't go (well, we are on holiday, after all!) After breakfast we read and went on the computer, and I had coffee and wrote a blog post. Then we walked the short distance into Hartington village centre and installed ourselves at a table in the shade outside the Devonshire Arms. Gradually the expected Morris dancers began to appear, and we ordered our lunch to enjoy to the accompaniment of the music and dancing. 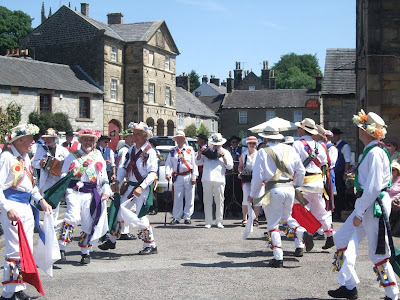 There were bells but no sticks. 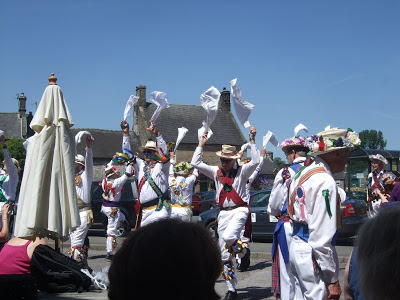 A German team were visiting - their dances seemed slightly tamer than the English versions. 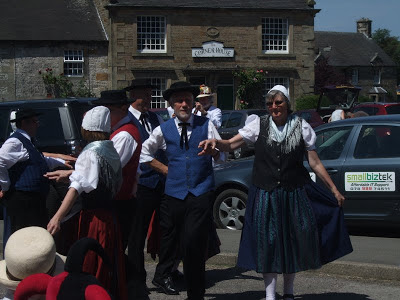 The whole event was a good build up to the afternoon, when we stayed in and watched Andy Murray do quite well in a tennis match. It was too hot to be out walking, anyway.

As soon as the tennis finished (well done, Murray) we made sandwiches to take with us on a walk in to cool of the evening, except that, on opening the door of the thick-walled cottage, it was like walking into an oven. Even though the sky had clouded over the walls were giving off vast amounts of heat. 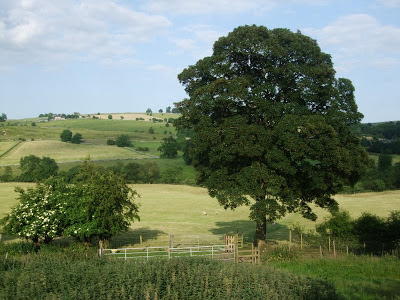 We walked along footpaths through fields to Sheen, following the sound of church bells. A service was evidently about to start, but we would be late as we had a mile or more to walk. Perhaps we could sneak in at the back. When we got there we found a special flower festival praise service under way: instead of the handful of people we were expecting the church was full! 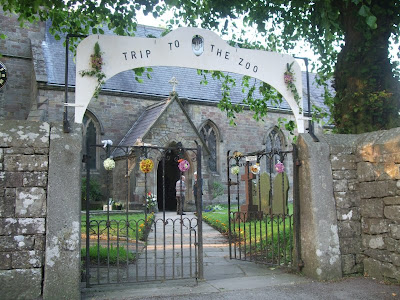 We hadn't missed too much, and we were glad we'd gone. The theme of the flower festival was "Going to the Zoo", with lots of animal-themed displays. The lion was impressive. 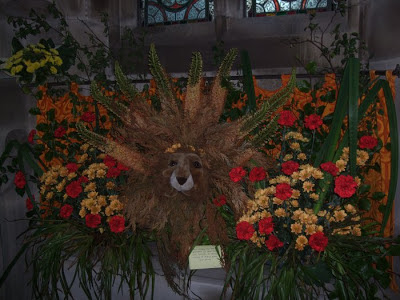 It will be even better when the mane is fully in bloom.
Posted by Halfie at 10:30