A few weeks ago I received an e-mail out of the blue from a writer for Towpath Talk, the free monthly canal newspaper. The journalist, Helen Gazeley, had spotted some interesting things on my blog. She asked me if I'd be happy for her to mention the blog in her column, The Wet Web, and asked me to send her a few photos. 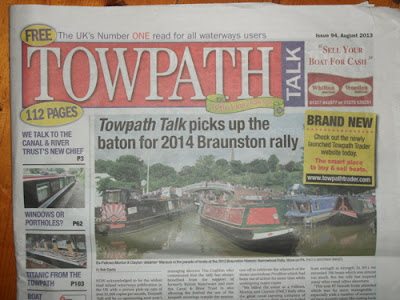 Well, of course I was happy! Especially as Helen said that she might be able to mention that I had a share for sale in Shadow.

The August number came out during the IWA Festival, so I grabbed a copy and found this near the back: 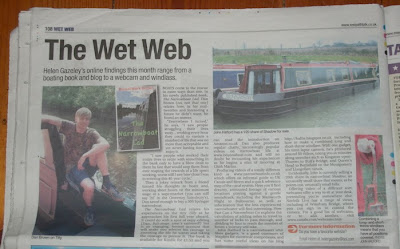 Not only was the share-for-sale mentioned, it was accompanied by a large photo of Shadow!

The other things featured were my time-lapse videos and a post I did a while ago about a combined long- and short-throw windlass.

Here is the text of the relevant section (the article is here):


John Halford is a narrowboater who likes gadgets, is a good customer of Maplins for electronic components, and has some useful ideas on his blog http://jhalfie.blogspot.co.uk including how to make a combined long and short-throw windlass. With one gadget, his time-lapse camera, he’s produced around 50 videos, taking you in minutes along stretches such as Kingston-upon-Thames to Bull’s Bridge, and Queen’s Head to Bettisfield on the Montgomery and Llangollen canals.
Incidentally, John is currently selling a 20th share in narrowboat Shadow, an unusually small share that means, as he points out, unusually small bills.
*********************

The 1/20 share is still for sale, despite the massive publicity, so, if you're interested, leave a comment below. In the extract above I have just noticed that the URL was incorrect (I have now corrected it) - so that may be a reason why no-one has contacted me about the share!
Posted by Halfie at 23:15