On Thursday I awoke with a swollen left cheek after a little gum ache in the night. To cut a very long story short, after walking in to the walk-in clinic, and speaking to an out-of-hours emergency dentist on the phone, I presented myself, as advised, to Milton Keynes A&E at 8.00 pm. The triage nurse saw me straight away, but I was told there'd be about three hours' wait before a doctor could examine me. Four hours later, at midnight, I was called, had my face felt, and booked in for an X-ray. This was done promptly - two whole-head images - and I was told to wait back in the main waiting room where we'd been earlier (Jan was with me through this ordeal).

There the time dragged even more than it had before. I managed to snooze for a few uncomfortable minutes - I was dog tired. After an hour I asked the reception desk what was going on. I was reluctant to do this as the department was busy. The cheerful receptionist went away, and came back saying that I'd be next. OK, this should all be over soon, we thought. Another hour later (!) Jan tried again. This time the message came back that the doctor who had seen me had been called to resusc, but that he would see me soon. At about 2.15 am I was called. The doctor seemed surprised to see us. He had thought that we'd gone, as he couldn't find us earlier. We explained that we'd been told to return to the main waiting area. He said that that was wrong, and who had told us to go there? He implied that it had been our fault. Anyway, we then had to wait some more while he went to look at the X-rays - nothing abnormal was evident - and he said he'd get me some antibiotics. He did apologise for our having to wait so long, but I wouldn't have minded so much had I had any confidence that he knew what he was doing.

So that was it, then. A bunch of antibiotics and back to the boat to bed. Er ... no, not quite. The next stage of the farce began here. In order to pay for the penicillin I was handed a car park ticket, told to put it in the machine outside, and pay the £7.60 prescription charge. All right, slightly weird, but we'd do it. At the machine we put the card in, and could hardly believe what we read. "Please insert £111.80." Ha ha, very funny. I pressed the cancel button, got the card back and took it back to the person who had given it to me. She seemed surprised, but in a resigned way, as if things like that happen all the time, and said she'd note that we'd tried to pay. We were then told we could go. The time was now 2.45 am. We'd been there for six and three quarter hours. We walked straight back to the marina (only ten minutes away) and BED!

The irritating thing is that I believe that the infection would have cleared up by itself, and I could have avoided all this. At least my trauma was not as serious as some of the cases which presented - and I didn't see any of the ambulance patients - so I consider myself fortunate, really.

Condition update: the swelling is going down and I am in no pain. I was not in pain anyway, which adds to the frustration somehow!

Back to more pleasant things: here's a photo from our trip down to Watford ten days ago. This is at Hunton Bridge, Abbots Langley. 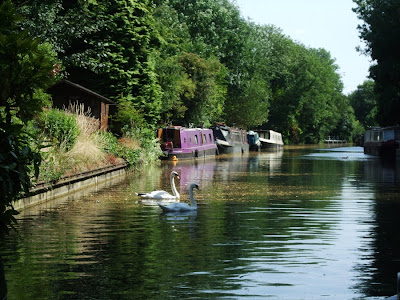 Gosh, you have more patience than even me!!

That really is just toooooo slow, but glad all is OK though

Sue, I had no choice, really. Swelling almost all gone now, but of course I don't know what it would have been like without the antibiotics.

That is one heck of a long time to wait…and why does it always happen at night? I had a similar experience with a fishbone that got stuck in my throat. That was about the same length of time and also at night!