Kevin wondered yesterday if there were any boats using the marina by the recent Taylor Woodrow development on the Paddington Branch of the Grand Union. He's talking about Engineer's Wharf, near Northolt. Here's a link to BW's blurb about it.

A modern urban village provides the setting for a brand new basin on
the Paddington Arm of the Grand Union Canal at Northolt in west
London. British Waterways has worked alongside Taylor Woodrow’s
Bryant Homes to develop the basin, known as Engineer’s Wharf, and
has created 20 new narrowboat moorings which we are now able to
offer boaters in the London area. 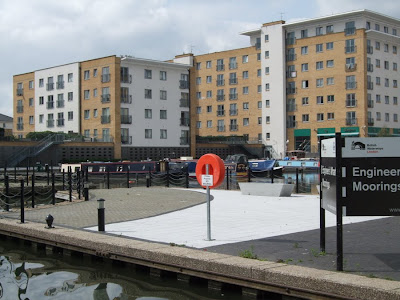 This is what it looked like when I passed in September last year.

I didn't know there was a "Grand Union Village", did you?

And here are the (2007) prices from the same Waterscape site:

We were among the first boats to moor there when the moorings opened a few years ago - it wasn't quite so pricey then as it was pre-tender and the surrounding development wasn't quite finished. When we moved out, I believe that our mooring sold at tender for around £1,500 more than we were paying!!!!!

We liked Enginers wharf - good access by car (rubbish by train) and nicely positioned on the long pound so there was always a winter cruise to be had (usually to the Black Horse pub and back!). We had nice boating neightbours there - it can make or break a mooring!

Itchy feet (or should that be an itchy tiller) took us from there to be continuous cruisers until our berth in Limehouse became available.

We are moored on the Paddington Arm and often walk round Engineers Wharf, today there are 6 narrow boats and a widebeam, it does look very exposed and doesnt appear to have any atmosphere. The BlueGreen is trying its best to attract customers with doing takeaway food we noticed.

And a very comprehensive answer it is too... thanks :)