Bit quiet on the blogging front...

Much of my spare time recently has been taken up with editing our daughter's wedding video, hence the lack of posts on this blog. Yes, this is the wedding of 2009. I know, I know, that was ages ago. But originally it was to have been edited by someone else; then they didn't do it and the tapes came to me. And then I struggled with Final Cut, the editing software. For some reason it crashes when trying to capture more than five minutes of video at a time, so I had to split it up into five minute chunks - 61 of them - that's about five hours of rushes! And that takes up a huge amount of storage. The edit is going all right, though. Ally and Ben will be really pleased to see it when it's finally done - it's looking good so far! Five hours sounds worse than it is, by the way: there were three cameras simultaneously filming the church ceremony, so the whole thing should be no more than two hours long. Which is plenty! I have suggested doing a cut-down version for showing other people: Ally and Ben might want to sit through all of it, but I doubt if many others will. 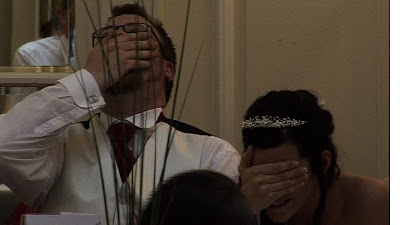 Here is a still showing Ben and Ally reacting to a particularly embarrassing revelation during the best man's speech! (Note to self: must brighten the pictures a bit...)
Posted by Halfie at 23:30