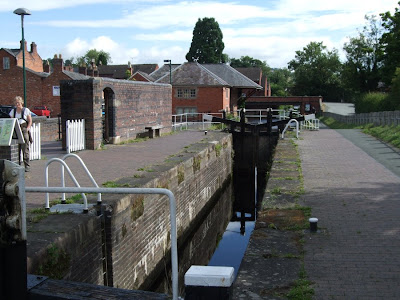 Sunday's walk, from Maesbury Marsh to the cottage at Bryn Mawr, was a mere 7 miles. On Monday we were dropped off in Welshpool for a walk back to the cottage. When we eventally go there my GPS told us we'd done 11.4 miles, at an overall average speed - i.e. including stops - of 1.8 mph. I'd seen that there were two pubs on our route, the Powis Arms at Pool Quay and the Horseshoe Inn at Arddleen. Just in case, by some remote chance, neither of these establishments was open, we bought some emergency rations at Morrison's next to the lock in Welshpool before setting off. 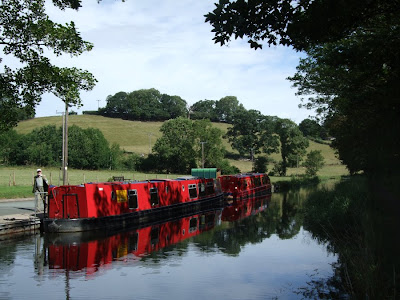 We were blessed with excellent walking weather: sunny, warm but not too hot, dry with a light breeze. The photo above shows two appropriately named narrowboats, fitted out for giving trips to disabled people: Heulwen II and Heulwen I. (Heulwen is Welsh for sunshine.) 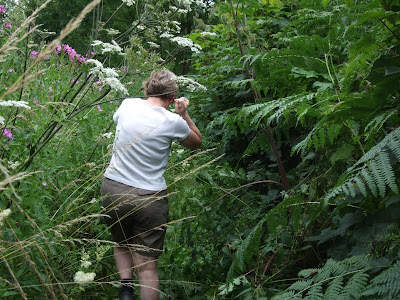 The towpath was rather more overgrown than the previous day's section. Here Jan does battle with brambles and nettles. Both of us suffered a few bites from bloodsucking insects, and had some rather itchy legs the next day. On two occasions we caught the little blighters at it. Grrr. 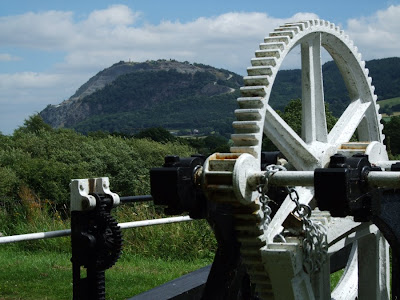 As well as the glorious weather we enjoyed glorious views. This is Rodney's Pillar on Breidden Hill across the Severn Valley. And the unusual top paddle gear on this part of the canal. It will be wonderful to cruise here when restoration is complete.

Oh, and we had to eat our emergency rations. Neither the Powis Arms nor the Horseshoe Inn was open. We diverted from our route to Four Crosses as well, but the first pub there was shut too. At that stage we were only a mile and a half from the cottage, so we abandoned thoughts of eating out en route. We'd already consumed our rations anyway. In the evening a takeaway curry from the Curry Hut in Llanymynech took away our rumbling tummies.
Posted by Halfie at 12:00

I am very happy to read this article..thanks for giving us this useful information. anti viral