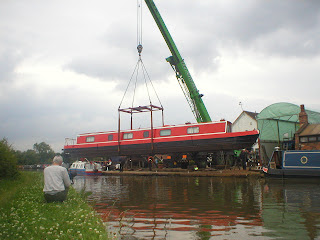 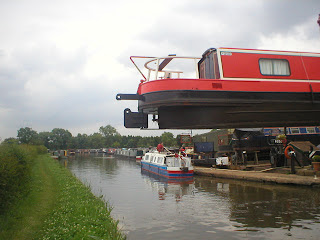 Under way at 0755 (must have had a lie in!) Daughter Alison phoned during the morning to tell us about the terrorist attack on London. It became the talking point of the cut. We stopped at the Canal Craft shed to buy postcards, a windlass and a painted watering can. The windlass was an unnecessary purchase as we found a few with our Sea Searchers later on: indeed, David actually sold some windlasses back to Mr. Canal Craft the next time we passed his shed. If I remember correctly the man's grandson painted the various cans and ornaments for pocket money.

At 1405 we paused for half an hour outside Streethay Wharf to watch (and for me to film) a boat being lifted out of the water.

At Fradley we turned left onto the Trent and Mersey Canal and moored up at 1640 just above the locks. Fradley Junction was busy: many boats were moored breasted up. David and I cycled to Alrewas and had a look round the church graveyard.