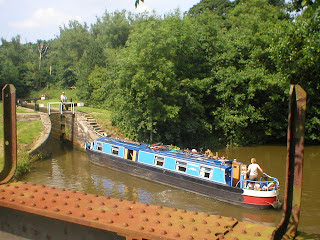 To celebrate having survived 25 years at the BBC I took nine weeks off in the summer of 2005 in order to do some serious canal cruising. My brother David was himself coming up to 25 years at the Beeb, and so together we hired a 58 foot narrowboat with the aim of "doing" some of the wonders of the waterways. I'd booked a passage through Standedge Tunnel, so that was one. Others on the list were the Anderton Lift, Worsley and the Pontcysyllte Aqueduct.

On Saturday 2nd July Jan and I boarded Lee Swallow at Willowbridge Marina on the Grand Union just south of Bletchley. David was to join us three days later. We set off at 1620 and headed south because that was the way the boat was facing. After winding we passed the marina at 1720 and tied up by the Peartree Bridge Inn in Milton Keynes. There was a bit of car shuffling to be done. I cycled back to Willowbridge and drove to Peartree Bridge. We ate in the carvery - good value, shame about the beer (the Bass tasted off). At 2125 we set off again to get away from the really loud live band playing in the pub. We wanted a peaceful first night! We found it just beyond Bridge 84.