This is the third day in a row that we have seen rats. The most disgusting sight was round the back of Hatton Top Lock Café, where two rats scurried away from a ground-level electric fan unit as we approached. Today I saw a rat in the undergrowth at Long Itchington. Has anyone else noticed more rats about? I have no photos of the furry rodents ... but here's another example of broad daylight nefarious goings on: 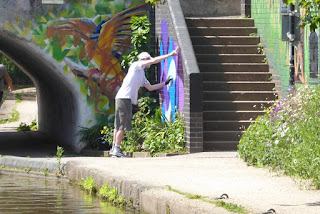 This graffiti painter's work to me seemed pure vandalism, certainly not up to the standard immediately to his left. This was in Leamington Spa.
[Update from Pip and Mick: The chap in Leamington was working on a piece for Leamington Mural Festival, the artists name is Lune. All above board.] 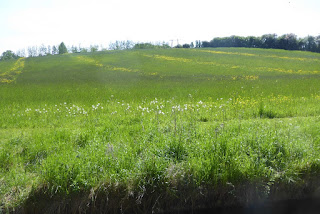 As we emerged into the countryside there was a field with broad stripes of buttercups. Why? How?
And then, the other side of Bridge 31, as indicated on Waterway Routes, the dreaded HS2 crossing point. To the north the earth movers were lined up, all big wheels and yellow paint and looking like they mean business.

To the south a new silver city and a huge heap of earth which will form the basis of the railway bridge over the canal. 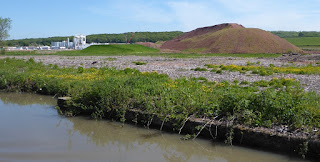 We shared many of today's locks.  Here we are going up the Bascote Staircase, our last locks before we tied up at Long Itchington. 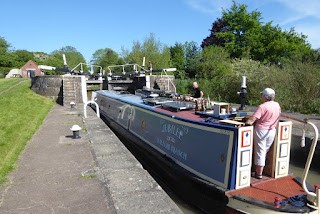 After tea on board we went for a walk, discovering first that we had moored on the aqueduct over the River Itchen. 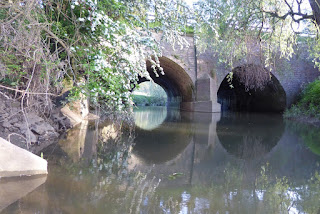 In the village itself a spoof blue plaque caught my eye. 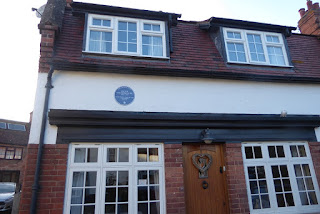 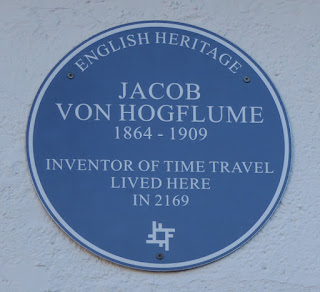 There was nothing fake about this song thrush singing loudly and clearly in a tree by the canal. 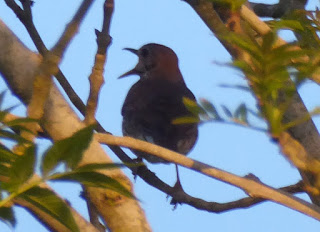 The chap in Leamington was working on a piece for Leamington Mural Festival, the artists name is Lune. All above board.

Thanks Pip and Mick, I shall update my blog. And when I searched for info on the blue plaque your excellent post from six years ago came up.