Cold outside, cold in the tunnel, cold at the pub

As we moved onto the water point at Etruria this morning NB Olinda had just finished and was winding by Brindley's statue.

Olinda is diesel-electric, but I didn't get a chance to ask about the specifics of how that is done. Norman and Linda are fellow BCF members; they were off down the Stoke locks while we turned right to go north towards Middlewich. Norman designed the boat himself, taking inspiration from the Orient Express. He uses the wheel steering on wide waters such as rivers. 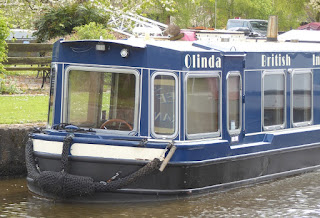 It rained as we passed Westport Lake but it had eased off by the time we reached Harecastle Tunnel. We had about 30 minutes to wait for two southbound boats, then we were the first of four boats going north.
The tunnel keeper said it would be cold in there.  I found it hard to believe it could be any colder that the conditions we were experiencing - we had sleet at one point - but he was right.  As soon as we emerged Jan took the helm and I went inside to revitalise the fire, which I had had to damp down before entering the tunnel. 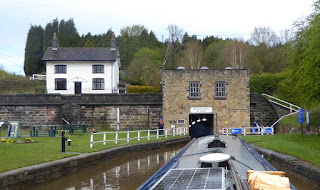 After one lock at Kidsgrove we stopped for lunch and the very convenient new Lidl.
By one of the subsequent locks was what looked like a roasting tray fixed to a post.  What for?  Feeding birds?  Bathing birds?  Anyone know? 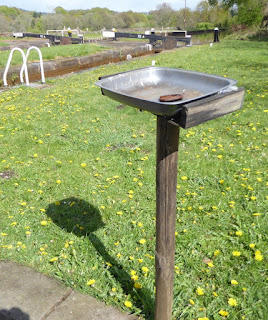 Many of the locks on this section are paired, but some of the "extra" locks are unusable, to say the least. 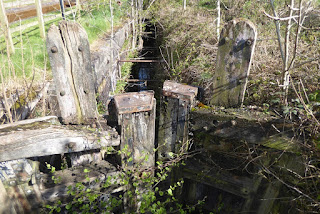 We tied up at Rode Heath, just past the Broughton Arms. After tea on board we met up with (BCF) friends Martin and Buff for a drink in at the pub. Despite overhead electric bar heaters I got cold sitting outside - the steel stools didn't help.  I did have an exceptionally tasty pint of Hobgoblin, though.
Tomorrow we'll see how near to Middlewich we can get, given that Jan has a Zoom meeting at 1500.
Posted by Halfie at 22:40