All hail the British weather!

After breakfast we went for a short walk on Rode Heath Ride, the site of a former salt works. I saw no evidence of the old industry, but there was a pretty river. 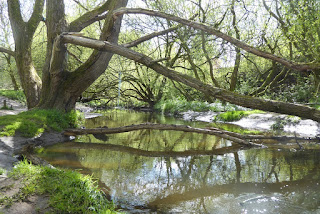 I thought the weather was meant to be dry today. It was anything but. I was inside making coffee when Jan steered through a hail shower. She reported that hailstones are not her favourite food. 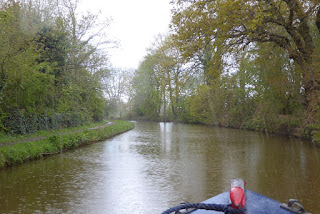 At Hassall Green we passed under the M6, the stove still going overtime. I don't think it has ever been used so much in May. 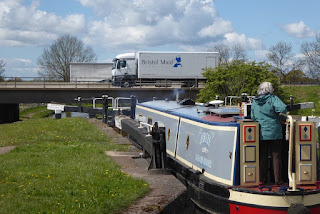 We stopped for Jan's Zoom meeting at Wheelock. nb Recalcitrant came past, sporting what looked like scrap metal - but interesting scrap metal - welded to form a barrier round the stern. The cabin looked to be wooden, with intricately carved window frames (not captured in my photo). 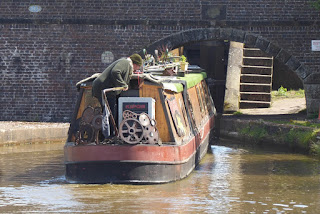 By 6pm, with another shower starting, we had had enough. We stopped west of Sandbach, about a mile and a half before Booth Lane Locks. We tied to rings against very "coarse" piling, such that only one fender could work satisfactorily. Hmm. I think I know what's going to go "bump" in the night.
In a gap between showers the sun came out and bathed Jubilee in a yellow glow. 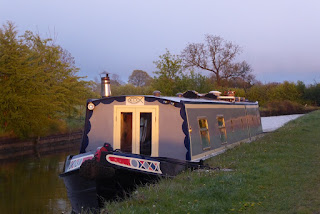 Middlewich tomorrow, and a diesel top-up.
Posted by Halfie at 22:54

Safe travelling,overeater like English channel on Tuesday.our stove on all the time back in Drayton now!!!

Unknown, your message seems to have been mangled and I'm having difficulty translating! Who are you?

I watched Recalcitrant having its new cabin etc. on the Coventry Canal at Mancetter a couple of years ago. Took them months. All made out of old packing crates and the like but, as you say, intricate carving.