I picked up a copy of NarrowBoat magazine from WHSmith the other day, and I was surprised to see that the boat featured on the cover was nb Kew. This boat belongs to friends David and Mary, and I've had the privilege of steering it on more than one occasion. 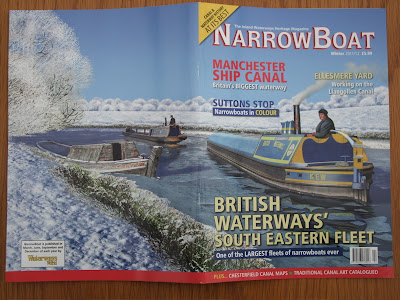 Kew is depicted being towed by motor Sutton.
The boat must have looked like this when David and Mary bought it from BW when it was selling off the fleet. There was still coal dust in the hold, which they have mostly converted to living accomodation. 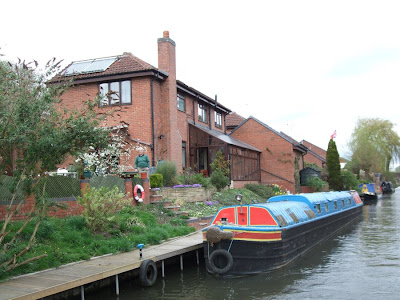 The blue fibreglass top has been retained but, for the most part, raised and fixed in position over the cabin.

The second and third surprises came when I flicked through the magazine, at this stage still in the shop. There was a black-and-white photo of Chertsey, paired with Exe (have you seen it, Sarah?), and, on the same page, Darley, owned by blogger Blossom.

As Exe is a three-letter-river class boat like Kew, I wonder if it was also a bluetop. I can't see from the photo.
Posted by Halfie at 09:00

Yes, it's tantalising isn't it as you can't actually identify it in the photo as printed. I have no reason to doubt that it is Chertsey though, and the only photo I have seen from this period. If Chertsey was painted in the predominantly yellow livery as seems to be the case here, it makes it even more unlikely that it ever actually carried the colours it now does.

Although the cabinsides of Chertsey are very faded the cabin borders are somwhat lighter so I think likely it is not the predominantly yellow livery but instead the later blue and yellow one albeit well past its best.

The butty Exe is a wooden Josher. There was a river class "blue top" butty given the same name but I don't think it was built until after this picture was taken.