The challenges of Wicken Lode

We had an excellent spot in Ely, after the first night that is. Here we had a good view of the trains but were undisturbed by them. 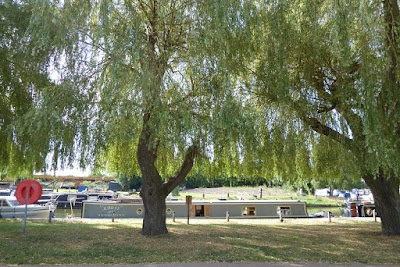 We left at 1055, just before our 48 hours limit was up, and continued south on the Great Ouse. The structure at the entrance to Soham Lode doesn't appear to obstruct water or boats, but the weed looks forbidding. Oh, and there's a No Entry sign. 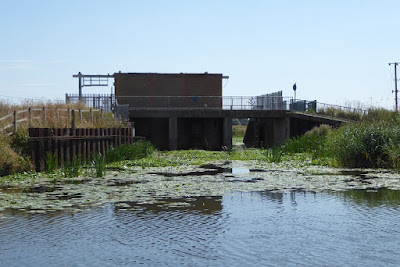 Before Pope's Corner, where the Cam joins the Great Ouse, we were overtaken by nb Cleddau. 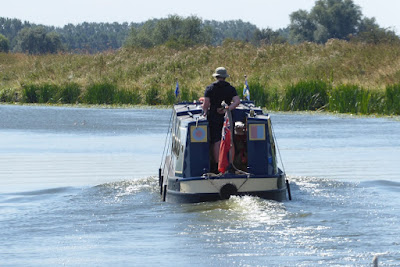 We turned left onto the River Cam - still EA waters here - and in three miles turned left again into Upware Lock at the start of Reach Lode. This is an unusual lock in that it has a guillotine gate at each end - and there was hardly any difference in water level either side. 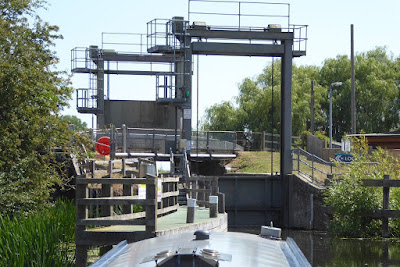 Having watered up at the second lock landing we continued a little further before stopping for lunch, breasting up to a boat on the EA moorings just before the entrance to Wicken Lode.

Entering Wicken Lode we were immediately into a very narrow and shallow channel. I thought we were probably getting weed round the prop, but going into astern every now and then didn't make much difference to our speed - or lack of it. We were down to 1.2 to 1.6 mph.

It was often tricky to see the channel, surrounded as we were by reeds and rushes. 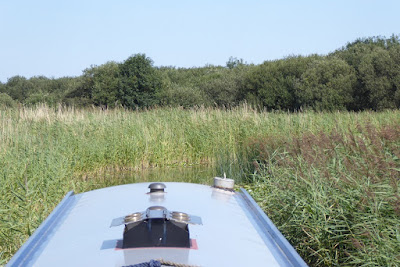 Another hazard was the National Trust trip boat, which zoomed along powered by an electric-sounding outboard engine. The boat runs the length of Wicken Lode, winding at the junction with Reach Lode.

Here it is having just overtaken us on its way back to the end of the lode. We had to squeeze to the side to allow it to pass each time. 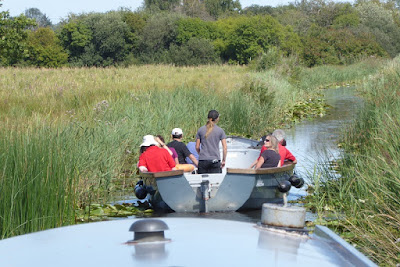 An hour and a mile-and-a-half after entering the lode we got to the end, where we winded, checked the prop (no weed) and returned slowly to Reach Lode. We encountered the trip boat again, meeting it at a blind bend on its way back. There was no contact, but it was close!

It was a relief to get back onto the "main line" and achieve a speed of 3 mph.

Half a mile further on we turned left onto Burwell Lode.


Our speed quickly dropped again as the channel narrowed and the weed made its presence felt. We made it to the end OK, though, winding where the lode splits in two and tying up on the EA mooring. 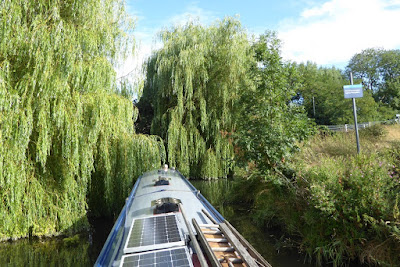 We ate tea sitting in shade on the bank, helped two boats tie up alongside us and walked into the large village of Burwell. The windmill looked spectacular in the evening sun. I've managed to exclude the housing estate which surrounds it from my photo. 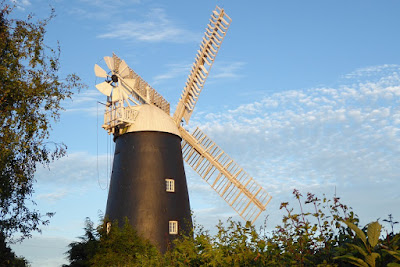 Arriving back at the boat we were surprised to find a party of anglers ignoring the No Fishing sign and on the tiny bit of mooring in front of us. One younger member of the group was resting her feet on the gunwale. Cheek! They did quickly move back from the boat when they saw us, but carried on fishing. 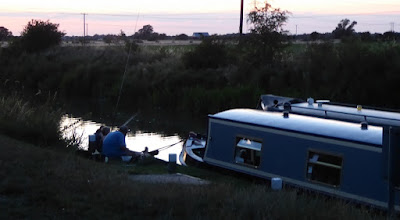 Tomorrow we plan to go to the end of Reach Lode, and then we'll have to decide if we're going get a licence for the Cambridge end of the Cam.
Posted by Halfie at 22:44

A shame you didn’t stay at Wicken overnight, it was our favourite mooring. So peaceful and loads of wildlife. Good luck with Reach Lode it gets very weedy in Summer and the bottom is often close to the top.
Not sure I would bother going to Cambridge as you can only get as far as Jesus and moorings are hard to get. Maybe just go to the ‘5 miles from anywhere’ pub. Or if you don’t want to moor at the pub there is an EA spot a bit further on that we nicknamed the 6 miles from anywhere.
Hope you enjoy the rest of the Ouse, after Popes Corner it becomes a very different River.

We went down to Jesus lock and really loved that end of the river Cam. It was a few weeks ago, so not school holidays, but we had no problem finding a mooring and we stayed the allowed 48 hours. We are at Holywell tonight, Lazy Otter tomorrow and the EA moorings near Pope Corner on Wednesday, so maybe we will meet - who knows? Great photo of Cleddau with, I am pretty certain, their eldest grandson at the helm. Jennie

Steve, as you will see from today's post we did indeed stop at the Five Miles.

Jennie, it seems our paths will cross. We'll look out for you.