Over the last few years Jubilee's wooden front doors have become increasingly difficult to open or shut. The threshold had bowed up in the middle, catching the undersides of both doors. I tried sanding the undersides of the doors to no avail. It was a problem we lived with, and one which more or less disappeared in the summer months. I assumed this was because the doors dried out and shrank in the warmer weather, combining with the steelwork of the boat expanding.
On Monday I found the root of the problem.  Our friends Chris and Di joined us for a (socially distanced, outside) coffee and I mentioned that I should have asked him to bring a chisel.  As we talked Chris pulled off the (loose) horizontal architrave immediately under the threshold.  The photo shows the bowed threshold with the architrave removed. 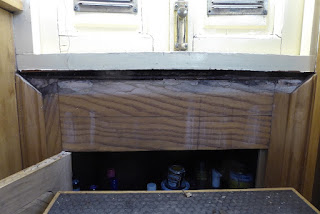 I could then see what was going on. The threshold sat on two wooden packing pieces lifting it off a lip of steelwork. The steel had rusted; the rust had expanded and pushed up the packing and, with it, the threshold. In the middle of the picture below is what's left of one of the packing pieces after I dug most of it away. You can see an extra-thick area of rust under it. 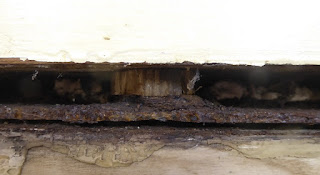 With the packing gone the doors work properly! I have inserted a thinner piece of packing; I will have to try to treat the rust to stop it happening again.
After lunch we continued south along the Shroppie to Brewood.  On the way from Wheaton Aston were several areas where trees had been cut down, leaving logs for collection.  They were mostly too big for us (with no chain saw on board) but I did find a few smaller pieces. 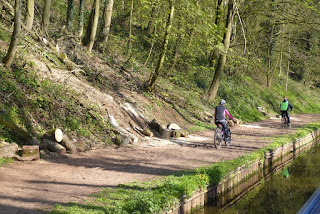 These I sawed up with a bow saw when we'd tied up at Brewood. The cut faces display a phenomenon I'd noticed before: a series of ridges at 90 degrees to the direction of cut. 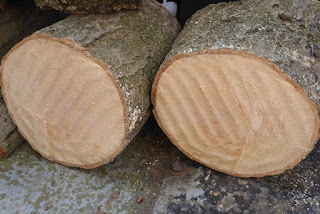 Comparing the pitch of the ridges with that of the saw shows that there is a correspondence. I think what's happening is that the teeth set up a sort of resonance as I draw the saw to and fro. 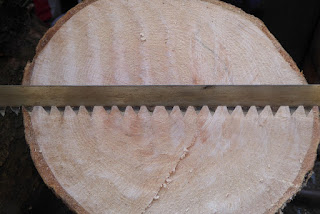 We walked round Brewood before returning to the boat for tea, which was part two of the previous day's takeaway.
On Tuesday 20th April we continued our journey.  After leaving Brewood we saw another sort of brood - of ducklings. 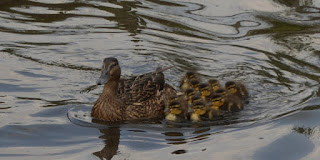 As we approached Pendeford we saw that some things are returning to normal: the dumping of supermarket trollies in the cut. 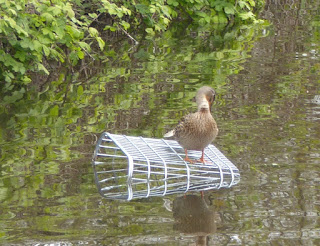 We stopped at Bridge 2 to walk to Morrisons. Just over the bridge, by a children's play area, was a patch of snake's head fritillaries growing out of the grass. 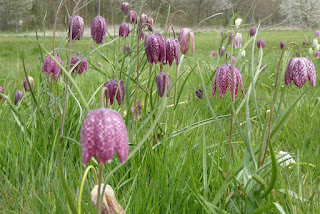 With our supplies back on board we passed through the stop lock and turned left at Autherley Junction onto the Staffs and Worcs Canal. We tied up at Coven Heath, out of earshot of the M54. It was nice to hear one or two trains, though.
I'm almost up to date with this blog now.  Tomorrow I shall write about a close encounter with Nev, Rachel and Percy.
(Updated to correct a typo)
Posted by Halfie at 22:43