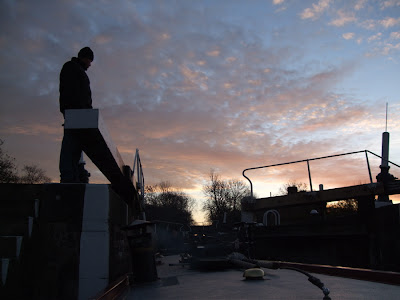 Was awoken at 0333 by a bird singing very loudly. David heard it too. No complaints: much preferable to the constant roar of traffic at some locations. According to Canalplan, which supplied the distance and lockage stats, today's cruise would take 10 hours. In the event it turned out to be two hours less, as the three of us worked the locks as a well-oiled team (and that's before stopping at the pub!)

We got under way at 0710, a full half-hour before sunrise. Pre-dawn stillness, and plenty of daylight. Stopped off at Royal Leamington Spa for a paper. I wonder how many other towns wish their shoppers a Happy Diwali? 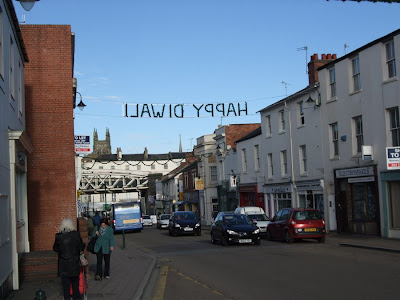 Just after Leamington Spa the canal passes over a railway line and the River Avon on two aqueducts. A swan took off and landed in front of us as we were on the first of these, and I managed to capture its second take off as we approached the second. 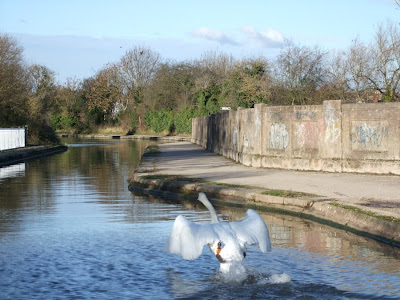 At Kate Boats in Warwick, just a bit further on, we bought gas (£21.90) and a bag of Taybrite coal (£12) - this seemed expensive. And then, after the two Cape Locks, it was onto the Hatton flight. Nearly every lock was in our favour, which helped our ascent in 2 hours 40 minutes. David took lock wheeling to an extreme. 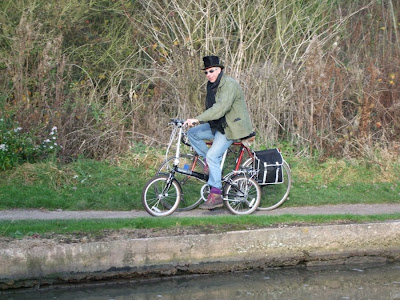 Actually he was helpfully recovering my bike which I'd left at a lower lock...

There was a surplus of water gushing down every overflow weir. This surplus was to give us a problem later in the week. 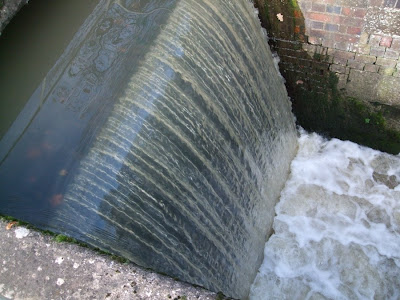 We were watering up at the top lock by 1515, after which we ate on board again: chicken pie followed by syrup sponge and custard. Yum! Meals seem to be getting earlier: this was at five o'clock! Then we tramped across a field to the "canalside" Waterman pub - gastro feel and gastro prices (crew had checked earlier) for some pleasant Arkwright's ale. Back on Shadow Will got out his newly acquired 20th Anniversary edition of Trivial Pursuit, which we pursued trivially for four hours, packing it in at a quarter past midnight! (No winner, but Will had gained a full set of cheeses, with David and I each needing one more). 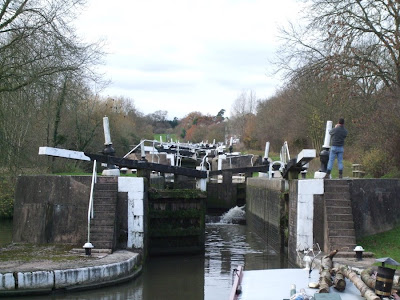 Will photographing the "Stairway to Heaven"

edited to correct number of locks
Posted by Halfie at 18:51