Here's a man who's not afraid of getting his hands dirty 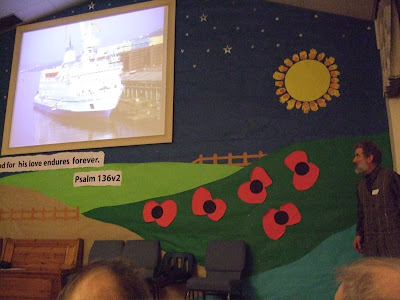 Edwin Fasham on the right, with MV Logos Hope

We've just got back from the annual general meeting, in Nottingham, of the Boaters' Christian Fellowship. Three hours' drive there, and three hours' back; but it was worth it. One highlight was a talk by Edwin Fasham, illustrated with photos, on how he singlehandedly rebuilt a 12,000 tonne former North Sea ferry as a mission ship. OK, he didn't do it quite singlehandedly, but he described in his delightful Brummie accent his intimate involvement with much of the heavy engineering work. While he was working on the ship, the Logos Hope, an auxiliary engine seized, filling the engine room with smoke. This engine had nine cylinders, each of 11 litres capacity, and was HUGE! It took Edwin three days to free it off: a main bearing had broken, and shell bearings were twisted up (something like that, anyway). One of his photos was of the crankshaft, some 12 feet long and weighing in at 14 tonnes! (Some of my figures may be wrong - I was taken aback by the sheer scale of the project). After filing smooth the crankshaft, and straightening it (!) Edwin got the engine going again. That was just one of the many examples he gave of the mind-boggling tasks he undertook. And for no pay! 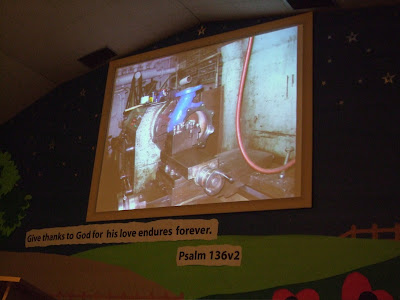 sewage pump which Edwin was working on

The presentation was a masterpiece of coupling a talk with photos. No picture outstayed its welcome; no words were wasted. As soon as Edwin had finished with one image it was "Next", and straight into the next part of the story.

(edited to add links and another pic)
Posted by Halfie at 22:52