Partial solar eclipse and an old lock at Cosgrove

I have some catching up to do as I have neglected this blog for quite a few days - oops! First, did you see the partial eclipse of the sun today? We had enough sunshine in Bletchley for me to project the sun onto a white card using a pair of cheap binoculars. 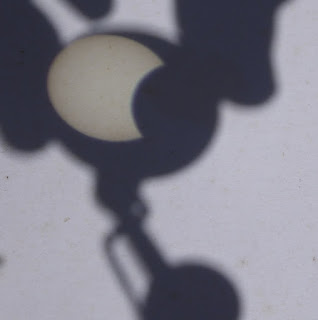 Nothing like as impressive as a total eclipse (which I was fortunate to see in France in 1999), but it's nice to see the moon nibbling away at the sun. There was no discernible darkening of the surroundings - that only happened when the odd cloud passed in front of the sun. 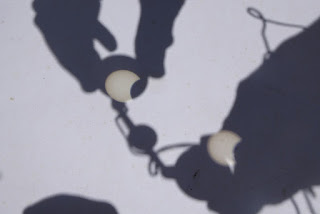 Now back to the business of catching up.

Josiah was raring to go, having put on his lifejacket, so we set off immediately after breakfast.  The canal was covered in places with furry seeds. 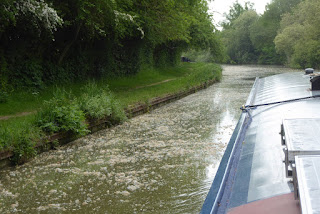 I think they came from willow trees. 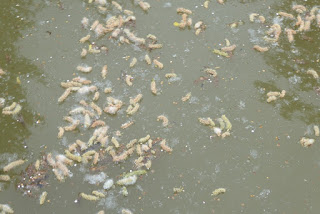 At Cosgrove we stopped to explore the horse tunnel under the canal and looked round the church. 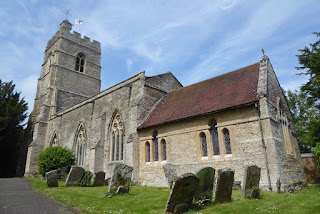 And here's Josiah in the mouth of the horse tunnel. 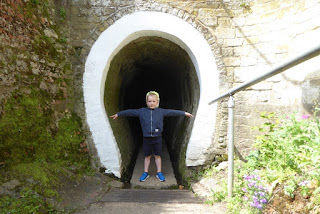 Back on board, we continued down Cosgrove Lock, across the aqueduct and tied up just before the Galleon.  Ally came to collect Josiah leaving us to have a quiet evening on our own.  We walked through the Ouse Valley Park to the Iron Trunk Aqueduct over the Great Ouse.  The footpaths here, as in many parts of Milton Keynes, are of very high quality being smooth and wheelchair-friendly.  It felt odd walking on these paths through fields of grazing cattle.
There are some nice photos to be had of the aqueduct leaping over the river.  But here are mine. 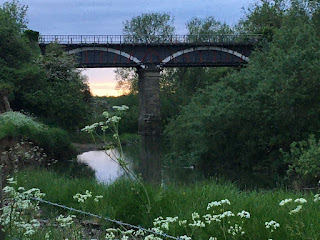 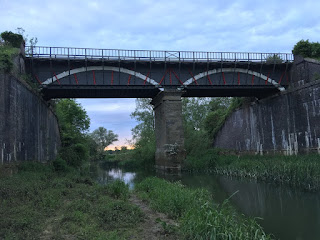 Having walked through the horse tunnel immediately to the south of the aqueduct we looked for evidence of the former locks which led down to a crossing of the Great Ouse on the level. Here's what we found: a gate and a lock chamber, still in remarkably good condition given the length of time since it was last used. The current iron trunk aqueduct was opened in 1811 and I can't imagine anyone wanting to use slow and wasteful locks when they could go straight across, so perhaps the old locks fell into disuse from then. (I suppose they might have been used if the aqueduct was closed for maintenance.) 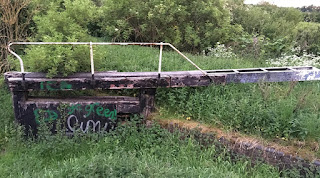 Jan noticed a strange phenomenon in the sky while we were at the lock. I don't think I've seen a red rainbow before. 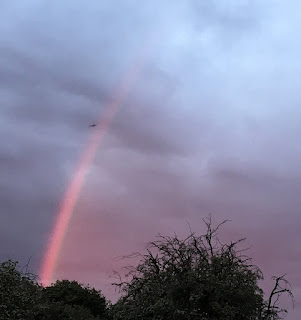 The sun was setting and turning deep red, hence the apparent lack of other colours in the rainbow. 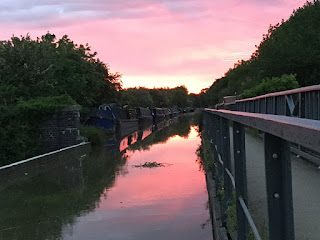 After looking at the sunset over the aqueduct we returned to the boat.
Posted by Halfie at 19:37

The lock gates and "chamber" alongside the embankment were installed only a few years ago by the Milton Keynes Parks Trust to indicate to the public the line of the original locks that did drop the canal down to the river crossing. The gates were recycled from elsewhere. You can also find the line of the original locks on the other side of the river.