Laying it on with a trowel

Today I've been doing a job that's been waiting ever since I had the long outbuilding repaired. The walls are clay lump - except where this end wall was rebuilt with modern blocks after the roof collapsed. To cover up the ugly repair I've been spreading a clay mixture over it. 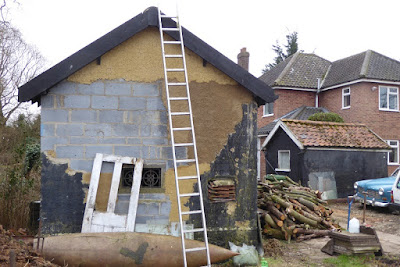 The black is the original wall, the light brown is the gable and at the bottom behind the ladder is where I applied my homemade clay render some time ago and the dark brown is what I had done today up to the point I took the photo. I hope it sticks!

When it's dry I shall coat it with a black tar varnish.

To make the render all I do is mix some of the old clay lump, which fell down, with water in a bucket. 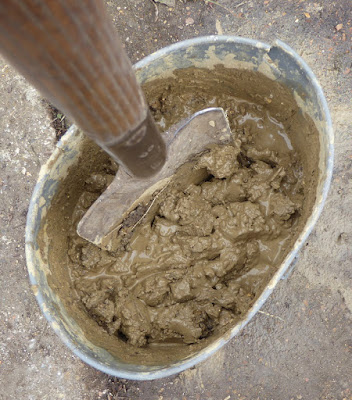 And then I apply it with a trowel. 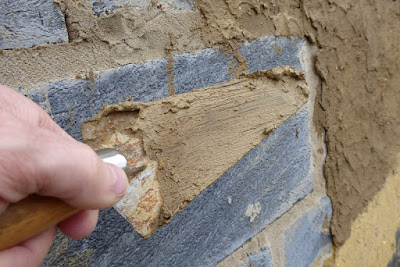 It takes an unbelievably long time. When I came in at 6pm - when it was getting dark - I'd done less than half the wall. And that was with a 10am start. At least the blacking is a quicker job.

(edited to correct typo)
Posted by Halfie at 21:45

Would a plastering trowel not be better ? Would get more "product" on in one sweep. Only £7 for a cheepie one from Screwfix !

What you can't see is the other trowel I hold in my other hand (when I'm not taking a photo). There would be two problems with a plasterer's trowel: the mixture is very heavy and I keep having to remove stones.