So much to write about, so little time before I have to go to bed! Cap'n Ahab has just left us to return home after assisting our descent of the Wolverhampton 21.

This morning we set off up the Walsall Canal, turning into the Walsall Town Arm to tie up there at 1125. There was a boom across the entrance to the basin preventing us going in. 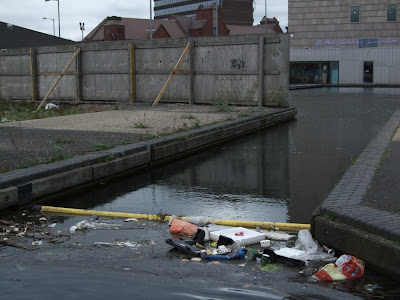 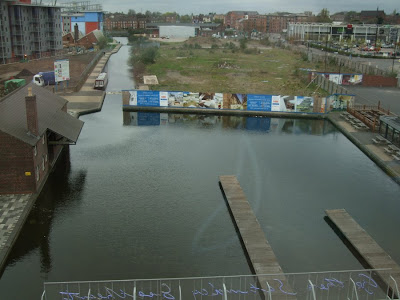 Actually the water only looks nice and clean on the surface. Although it's quite clear, there's a huge amount of muck and rubbish down there, as we found when having to reverse the quarter of a mile to the junction with the main line. A shirt got nicely tangled round the prop. It took about 15 minutes for me to free it.

A mostly trouble-free ascent of the Walsall Locks was followed by a reasonably clear run on the Wyrley and Essington to Horseley Fields Junction and the start of the Wolverhampton 21.

At Walsall Top Lock we talked to two young female students who were "just chillin'". One, who lives locally, said ours was the first boat she'd seen going through the locks! Well, today we had the canals almost entirely to ourselves. We saw just one moving boat, Cat Flap on the Walsall Canal. That's two moving boats in two days!

At Lock 4 of the 21 Andy, aka Captain Ahab, joined us to lend an extra pair of hands as we locked down. 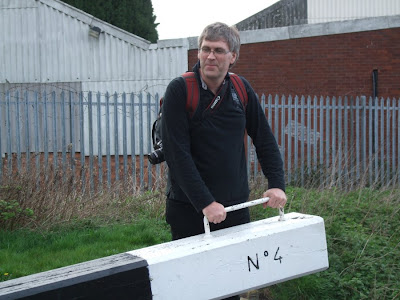 It was really good to meet you, Andy. The captain was invaluable when, a few locks later, Jan mentioned that the exhaust was a lot smokier than normal. I have to admit that at first I thought Jan was imagining it, but then there was a lot of blue smoke. We stopped the engine, lifted the deck boards, and were greeted with clouds of sweet-smelling water vapour. 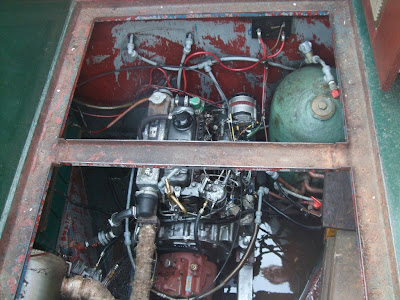 Oops. The temperature gauge was on the end stop. Ah. Not good. I checked the oil. The funny thing is that, this morning, when I did the usual engine checks, the oil level was on the minimum mark on the dipstick. So, for the first time ever on Shadow, I added some oil. Now when I checked, it wasn't even touching the bottom of the dipstick. After a pause for a cup of tea while things cooled down a bit, Andy noticed little pools of what looked like oil just below the rocker cover. Yup. It was oil. Perhaps the rocker cover wasn't bolted down tightly enough. There was what seemed to be fresh gasket sealant oozing from underneath. Hmm. Interesting. I was able to turn each nut by a few flats before I felt resistance. Had it not been tightened properly recently?

I topped up the oil again, and removed the coolant filler cap. You know how you're supposed to let the engine cool before removing the cap? And put a cloth round it? Well, I had a piece of paper towel to hand, so I used that. I wasn't prepared for what happened next. After turning easily, the cap suddenly shot off. Andy and I jumped back, and the cap landed in the bilge. It could have been a lot worse. I could have got a scalded hand or face. And the cap could have landed in a more inaccessible place.

After that scare I topped up the still-gurgling coolant with 5 litres of hot water. The temp. gauge now showed a much better reading of about 90 degrees, so we started the engine, and all seemed fine. 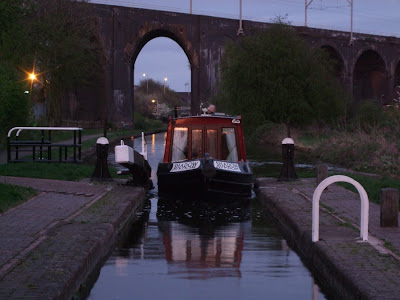 We had been in the lock the whole time, but were not holding anyone up of course, because we were the only boat moving. Now we had to crack on, as the light was fading. There were no more problems, and we tied up at Aldersley Junction at 2055. The last couple of locks were done as much by feel as sight! 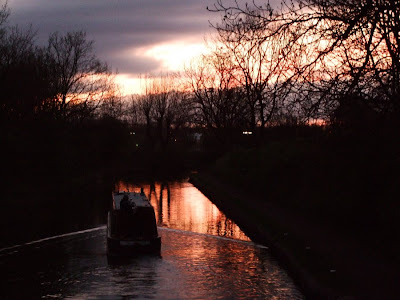 During all this, as well as doing most of the steering through the locks, Jan had somehow managed to cook up a sausage, bacon, onions and mashed potato feast which the three of us devoured as soon as we'd tied up.

An hour later, after a great chat with Andy, Andy left to walk back to his car, and I started to write this. And I managed to publish some of this prematurely too. Sorry.
Posted by Halfie at 22:23

well, no doubt it was the least of your troubles, but in case anyone reading is put off, the boom across the basin at Walsall is to keep rubbish out, not boats. It's only attached at one side and you just push it out of the way with your bow.
Jim

I do hope that is the last of your problems. I thought holidays on a narrowboat were supposed to be carefree, idyllic and restful. You are having one 'adventure' after another. Or do you enjoy each new challenge?

Jim, thanks. I wish there had been a notice to that effect, then!

H.S., yes, I enjoy the challenges! We have a day of countryside today, then it's back to inner city stuff again. Had no problems from troublemakers yet.

Not to mention the mushrooms and carrots!

Halfie and Jan
It was great to see you - a great evening - thanks.
Andy

You have mwntioned trouble makers before. Elucidate, please.