It's always a good idea to have a weed hatch which seals properly when closed. After the new propeller was fitted (the first time) we ran it in gear to check that all was well. As you would. Running at quite high revs in astern I noticed the smallest, slightest - most insignificant, really - dampness weeping from a tiny part of the weed hatch seal. Under normal running I doubt whether this would have happened, and even if it had, it would have evaporated before even getting into the bilge.

I made the mistake of mentioning this minute leak to the engineer. Oh, I've got some gasket sealant, he said, and squeezed a vile black sticky goo on top of the original seal, and tightened the cover down. When, some six hours of cruising later, that prop fell off, I could not open the weed hatch. It was glued into position so firmly that, as I have already described, even inserting a long piece of four-by-two under the handle and levering up wouldn't shift it. 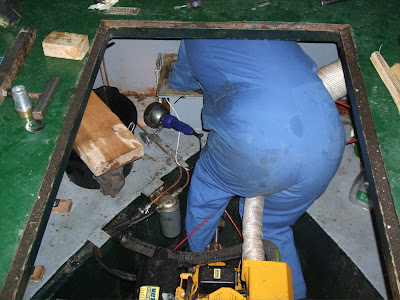 Well, the engineer did it by prising up the edges. This, of course, pulled away much of the original seal. 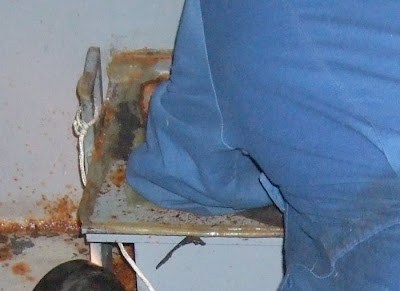 Bits of it were now stuck to the cover. It would need doing properly. But the engineer didn't have any of the proper stuff. He merely squeezed a different, "domestic", sealant around the hatch.

While at the IWA Festival I found out where to get some sealing strip from, so we'd stopped off at Val Wyatt Marine at Wargrave on Wednesday to get it from the chandlery there. I was very surprised to see one of the people who'd been on the Vetus stand working there - he gave me a good deal on the bits that I bought. As well as the sealing strip I got some Loctite for the prop shaft bolts. 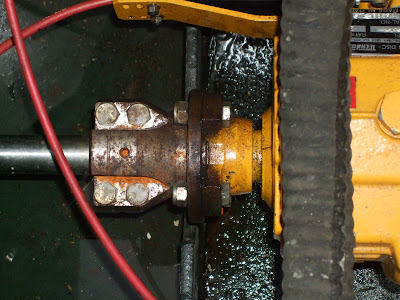 We'd now caught up with our schedule to get to Teddington at the right time for getting to Brentford and Thames Locks on Friday morning, so we stopped at Chertsey Bridge for lunch at the Kingfisher pub (good value food). 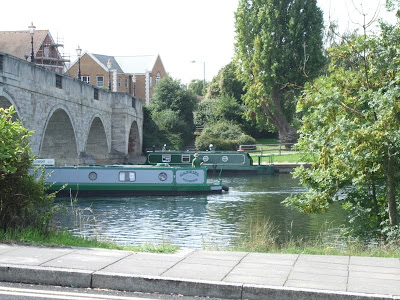 James Bell on Gabriel wondering where I am, and, probably, whether we've broken down again! (Over here, James!)

While Jan went to order the food I made a start on removing the old seal and all the nasty mastic etc. 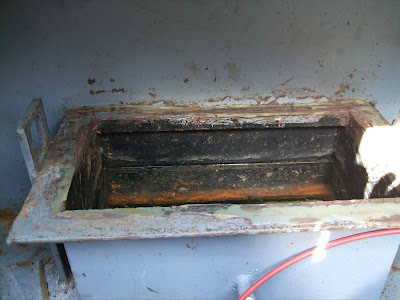 The sealing strip I bought was a self-adhesive strip of foam rubber about an inch wide, which I stuck to the underside of the weed hatch cover (after removing all traces of the mastic and cleaning it with white spirit). I thought about how to butt the joints, and came up with the design you can see in the photo. 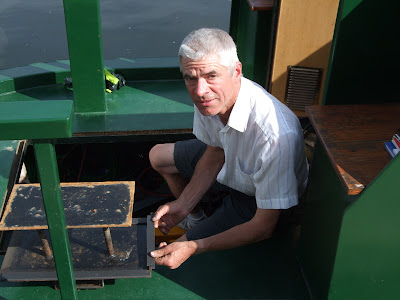 It was really easy to do, just snipping a square off each corner, and should be watertight. 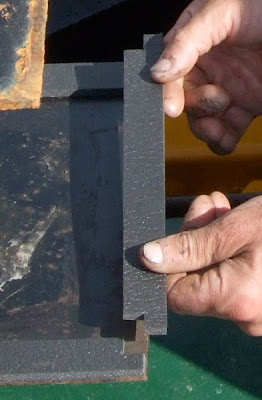 I left the remains of the old seal on the weed hatch for the owner to see. Don't know why, really. Anyway, it did the job. Now the hatch can be opened and shut!

The next time I had to open it was the next day, when there was a loud bang, and the engine suddenly stopped. That'll be tomorrow's post, then.
Posted by Halfie at 21:00

I've never been sure if you should stick the tape on the weed hatch suttound or the hatch itself. I tried the hatch but it started to come off so now its on the surround and its been fine for two years.
Andy

Andy, I can't see that it should make much difference, unless putting it on the hatch cover makes it more vulnerable to snagging when it's removed.

My goodness, you have had some adventures here Halfie. Glad you got the weed hatch fixed. Here's hoping the next story doesn't bring more disasters!

Andy Said "I've never been sure if you should stick the tape on the weed hatch surround or the hatch itself. I tried the hatch but it started to come off so now its on the surround and its been fine for two years."

Mine is stuck on the hatch surround, but with a light smear of petrolium jelly (as used on the battery terminals) to stop it sticking. It's been that way for six months, no problem with leaks or any sign sticking.

The article was very interesting and informative for me. weight loss