We got under way from Sonning at 0800. Nothing of huge significance happened until 1540, shortly after passing through Boulter's Lock in Maidenhead ...

In front of us were three people in the water struggling with their upside-down canoe. (I didn't say it was Willow which capsized!) Jan had seen them paddling some distance ahead just moments earlier, then a large French Brothers trip boat steamed past. Its wash had tipped them over into the Thames. 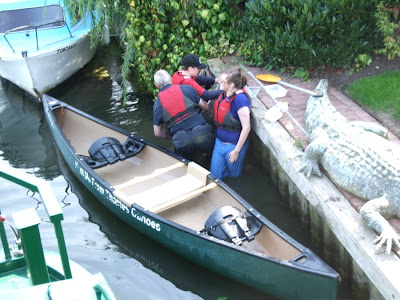 By the time we arrived on the scene they'd managed to get themselves and their canoe to the bank where, handily, there were some steps leading up to someone's back garden. As they seemed to be safe, I steered Willow in pursuit of the paddle (they wouldn't have wanted to be up the creek without it, after all). I overtook it, turned, and gently steered as if to run it over so as to give Jan, leaning over the gunwale at the bow, the best chance of grabbing it out of the water. Which she did. 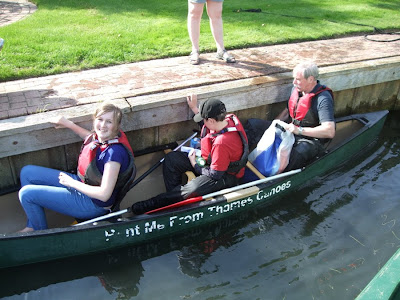 When we got back to the canoe its waterlogged crew had righted it, and were trying to bale it out by pushing the water out with their hands. We gave them plastic meat packaging trays and a cut-down plastic milk container to do the job more effectively, then I helped them lift the canoe (heavy) and tip the rest of the water out. Mike, and children Petra and Edward, were very grateful that we'd stopped and helped. Petra had lost a shoe, but that seemed to be the only casualty. I didn't ask about mobile phones! They had hired the canoe to paddle from Marlow to Windsor, so they still had over five miles and two locks to go. We shared Bray Lock with them, and they still seemed cheerful! 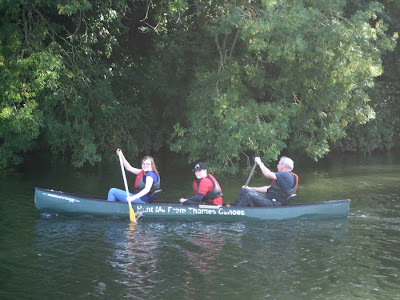 It was one of these wot did it! 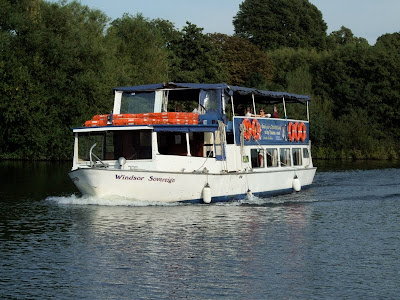 And now an observation about a different sort of water. The water you can drink.

Hours before all this excitement, above Shiplake Lock we watered up and emptied the elsan. We liked the Environment Agency water points. They're more widely spaced than those on the canals, that's true, but we had a useful EA guide to facilities at locks. And they seem to be found only at locks. (The guide would have been even more useful had it indicated whether the water point was above or below the lock.) They're like fire hoses. You simply pull a large bore rubbery hose, often coloured red, from the fixed but swivelling reel, stuff the end in the water tank filler, and get a crew member to turn it on (gently at first!). Done in no time! And you don't have to mess about with your own garden hose reel.

That night we moored at Windsor, by the Brocas, actually paying for the privilege! We had a great view of the castle from the boat, and we ate at the Al Fassia (Moroccan) restaurant. Excellent.

Halfie my heart cannot take these boating incident headlines! You got me this time, I'll admit it. :) I'm relieved it wasn't Willow and all is well in the end.
Safe journey,
Jaqueline USA

Jaqueline, the canals are going to seem tame after this Thames trip!

Didn't seem to be any mention of the crocodile in the background of the picture! A rare occurence along the Thames I hope? I gather that is Rolf Harris's home, we were told? Keep up the great blog... Doug

Doug, Ah! You spotted the crocodile! We cursed it for getting in the way. Rolf Harris's home? If he'd walked up to see what was going on I think I'd have fallen in (again)!

Rolf "cant you see what it is yet? Harris!

Rolf Harris's garden? Really? How do you know this crocodile belongs to him?