I mentioned in my last blog post that I'd been to Silverstone, so here are a few of the photos I took. Normal boating service will be resumed shortly.
The weather for the whole weekend was sunny and hot, just like it was the last time I came three years ago.  Friday evening saw the qualifying sessions for Saturday's "sprint qualifying".  Yes, qualifying for qualifying.  Lewis Hamilton emerged the fastest, with Max Verstappen second and Valteri Bottas third. 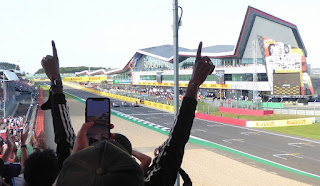 On the Saturday there was plenty of track action. I think this is a "Masters GT Challenge".

Back with Formula 1, whenever the British drivers Hamilton (of course), Lando Norris ...

... and George Russell came past the stands they were greeted with cheers and applause. 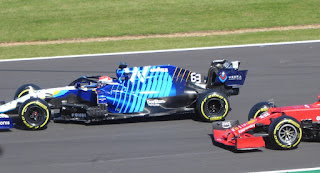 Verstappen won the sprint qualifying - a half-hour race with no scheduled pitstops - which gave him pole postion for the grand prix proper on the Sunday. 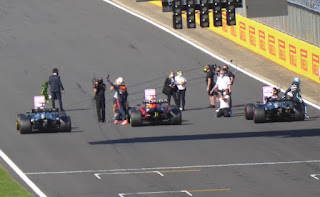 Before the race on Sunday Russell and Norris clearly enjoyed the fans' adulation. 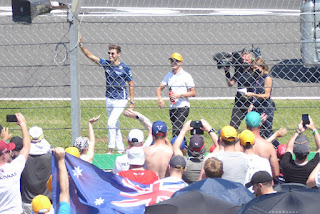 For the race itself I was not in the best position as far as seeing action was concerned. There is only one of my photos half worth showing: Hamilton doing a victory lap with a borrowed Union flag after his controversial win (having taken off Verstappen with a collision in the first lap).

That's it from Silverstone until the next time. Meanwhile we are currently outside the closed Anchor pub at High Offley on the Shroppie.
Posted by Halfie at 22:02

That must have been exciting, Halfie...just to be there with all the atmosphere!