A few minutes at the races

We have always liked Chester. Today the city was - still is - buzzing. The main event was the horse racing at the Roodee, which was drawing in the dressed-up crowds in their thousands. We had never witnessed a horse race before, and found that an excellent view could be had from the city wall alongside the track.

We completed our circuit of the wall, returned to the boat for lunch, and got into position by the racetrack (is that the right word?) in good time to see the 2.50 contended by just four horses. We were surprised that the start was on the other side of the course and that the horses raced only half a lap.

This was the scene with about 15 minutes to go. 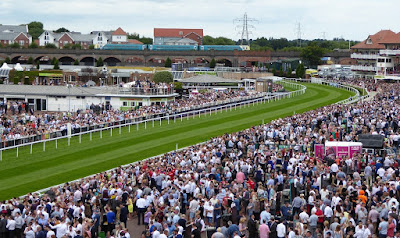 The race started on time and was over in no more than two minutes.

I was reasonably pleased with my action shot, especially as it was hand held on full zoom (30X). 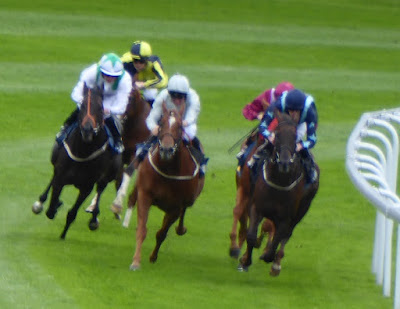 It seemed that the real point of the occasion - for those who had paid £15 or more to access the ground - was to dress up and drink to excess. Or should that be dress to excess and drink up? And lose money gambling, of course. We stayed for the next race, half an hour after the first one, and saw that the horses this time had to cover very nearly a whole lap. Perhaps these early races are merely warm-ups for the proper racing where - who knows? - maybe ten laps would be covered. No, maybe not.

Those two races were enough for us and we went for a cup of tea.

Jan spotted something about the red phone box. 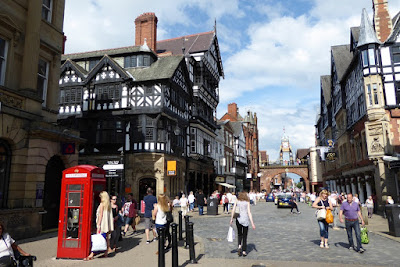 It now doubles as a cash machine. 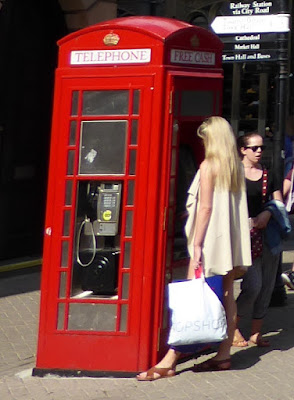 Has that happened everywhere and I just haven't noticed? Or is it just here in Chester?

We had hoped to be able to go down the Northgate staircase locks this evening, but there was no space on the visitor moorings at Tower Wharf. We've stayed where we are, by King Charles Tower, hoping that the Saturday night revellers will quieten down soon.