Jobs to do on Jubilee, mostly electrical 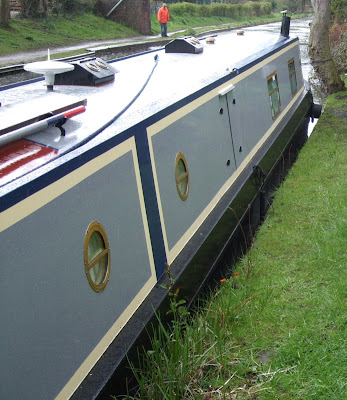 (not necessarily in this order)

1. Get an isolation transformer.

3. Clean off the nasty tar stain.

6. See about replacing some of the 20W halogen spotlights with LED bulbs.

1. The isolation transformer is for when the boat is hooked up to mains at the marina. The only sure way to remove the possibility of potentially corrosive earth loop currents is to use a mains isolation transformer so there is no connection to the shore line mains earth. I distrust so-called galvanic isolators, which comprise two pairs of back-to-back diodes. I'd rather spend £350 on something I know will always work than £70 on something which might work sometimes, but possibly not if a switched-mode power supply is being used on board.

3. I made the mistake of burning some green wood. The smoke condensed on the underside of the coolie hat and tar dripped down onto the cabin top, along the hand rail and down the side of the boat. I actually saw this happening, and touched the run with my finger. It was wet but not sticky, so I thought I'd be able to clean it off the next day. Er, no. The next day neither water nor white spirit would budge it. When I next go to the boat I'll try meths - unless anyone has a better idea. (And no, I won't be tempted to drink the stuff.)

At the top of the picture you can see where the handrail has a break to allow for drainage. Running down from here are two or three trickles of tar. Not easy to see, I grant you.

4. The former owner has been very good to us, considering we were taking away his pride-and-joy. Not only did he weld new anodes on and black the hull after we'd already said we'd buy the boat, but he also left us three brand new batteries to replace three which no longer held their charge. Now in the domestic battery bank there are currently five batteries. I'm thinking of removing all of them, and installing just the three new ones. As well as keeping to the good practice of not mixing old and new batteries, I think that there's more chance of keeping three batteries fully charged, compared with five. If we're careful with power usage, especially when not on shore power, I think this should work. I'll have to do one of Tony Brooks's energy audits.

5. There is a small battery charger connected to the battery bank. This can be switched on when connected to shore power. The charger will only be able to supply a trickle charge - no good if the batteries are being heavily used, such as when powering the inverter or running all 19 (!) 20W halogens. I need to find out about a more heavy duty device, one which will monitor the state of charge and adjust its output accordingly. The engine is fitted with two alternators, and there's a Sterling "Advanced Digital 4 Step Split Charge Alternator To Battery Charger" box in the engine room. 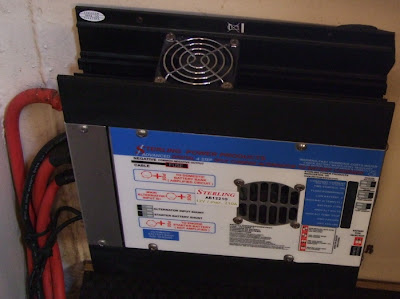 7. Get a second centre rope (or remove the wretched fairleads, which seem to serve only as traps for the rope, so you can't flick it over to the other side).
Posted by Halfie at 22:30

Fairy liquid and a lt of elbow exercise followed by polish.

We had the same as you, the cooly hat (which is now not used) caused the same problem.

We have also tried white spirit.. didn't work, but the fairy did! Clean as a whistle now.

Vic said he used a very very worn scourer, you know, one of those little oblong ones, but he said make sure it is well worn then it won't scratch the paint.

We got a very good deal on LEDs at Crick last year, from a company called JM Goods. We bought quite a few, which brought a decent discount. Are they the sort of halogens which have a bulb with two pins? If so, we've been very pleased with these:

They're plenty bright enough (especially if you've got 19 lights!) and use hardly any power. We've also got some wall lights, which we've fitted with similar LEDs, but with the pins sticking out the back rather than the side. We did about half the lights on BR last year, and I plan to do the rest at Crick this year.

A second centre line is a great idea. We always put both on for a long trip, but often don't bother for a short one. I've seen people who leave ropes in the fairleads all the time, which seems odd to me. But the fairleads are useful for giving an angle to pull the boat in (as well as protecting the paint on your handrail), so I wouldn't get rid of them.

You forgot the most important job...fit a perspex window in the side hatch.

Sue, many thanks for the tip. I'll give it a try when we're next at the boat. Is it ordinary car polish you use?

Adam, I haven't yet taken one of the lights out to see what type of connectors they have. Thanks for the link. And I'll get a second centre rope.

Jan, ah yes. I forgot to measure the hole!

You can buy "tar spot" remover for car paintwork - worked on my car but haven't tried it on the boat!

The second centre rope is a great idea...

And I vote for losing the fairleads. I have heard tales (OK, admittedly quite possibly apocryphal) of them becoming detached under strain, with predictably disastrous results. They cause more aggro than they solve anyway.

Try using wax polish as that's got T cut in it, or for stubbon areas use a little brasso as that's got compound in it. The boat looks wonderful by the way, you must be so pleased, congratulations!!! PS just saw nb Shadow at Braunston turn :-)

Indigo Sue, thanks, I think I used to have some tar spot remover somewhere. Now, where is it?

Sarah, I have witnessed a fairlead pinging off, so I know the dangers. Had I been able to specify everything on my second-hand boat they would not have been on the list, but there we are. I'll take a close look at them when we're next on board. And I'll ignore your mushroom suggestion!

Del and Al, I had some T-cut somewhere too! But I definitely have some car polish ... if that fails I can try the Brasso (testing a small, hidden area first, just to make sure!) Yes, we're very pleased.

Did you try the fairy liquid? We use Auto Glym super resin polish, it is fantastic and very quick, much better than the mer.. is it mer?.. that we used to use.

Sue, I did try the washing up liquid but it had no effect. Even with copious amounts of elbow grease! But the liquid polish was like magic. (Have you tried the polish on its own? You might find you save on Fairy Liquid!)

No I haven't tried. That is why I asked. We do have the odd times that our chimney leaks tar, we never know why it suddenly does that, there seems no reason, but it is very interesting indeed to see that liquid polish will wipe it clean.. Many thanks