Meeting an almost boater and getting bashed by kayaks

We were up early today as we were being picked up later to have a meal with Lorraine and Mike in Hunsdon. I pulled the boat forward onto the water point and found it had good pressure. After a few minutes the tank was full and we set off from Bishop's Stortford back down the Stort.

At Sheering Mill Lock (I think it was) we met a man who delighted in telling us that he now had the funds to buy a boat. Richard, accompanied by Harvey, his dog, helped us through the lock by closing a gate or two. He said it was the first lock he had ever touched, but was obviously looking forward to doing many more. I think he said he was going to buy his boat in the midlands and then head for the Lancaster Canal. I hope it all goes well for you, Richard, and may you pick up plenty of useful tips from the blogs and vlogs you look at. 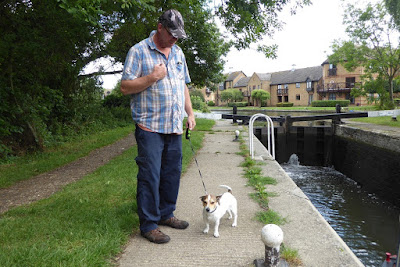 Feakes Lock is one of a number which have red and green discs painted on the bottom gates. Port and starboard? Anyone know what they are for? 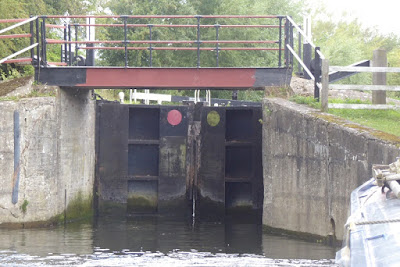 The sun shone as we went through a wooded section - very pretty. I saw two kingfishers today, one flying past us going the other way which is most unusual. (No kingfishers in the photo as far as I am aware.) 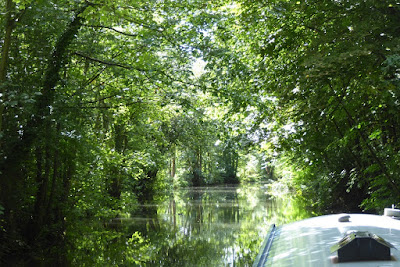 We tied up just below Burnt Mill Lock, opposite the climbing wall and kayaking centre. There was a group of exuberant children having a training session on kayaks; the things kept hitting the side of the boat. In the end I moved the boat forward to be slightly further away. At precisely the same time their session finished and they all got out of the water. 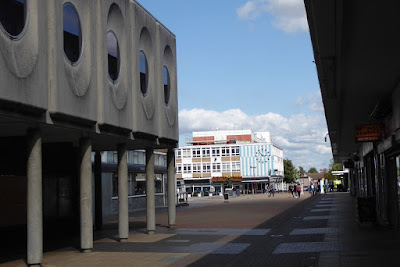 At least, that's the rather empty bit I saw. I used to drive through Harlow on my way to university before the M25 was built. I remember always looking out for boats on the river as I crossed it. (I also remember road signs with far too much information about small areas of the town.)

This evening we enjoyed the aforementioned meal with Mike and Lorraine; Lorraine is going to help me retrieve our car from Berkhamsted tomorrow which will be really useful.
Posted by Halfie at 22:59