We're back on board after three days at home. There's a useful informal car park by Carthagena Lock, so that's where we left the car while we took the boat to the festival moorings between Waltham Common Lock and Waltham Town Lock.

On the way here we encountered a dozen small powered boats from Broxbourne. 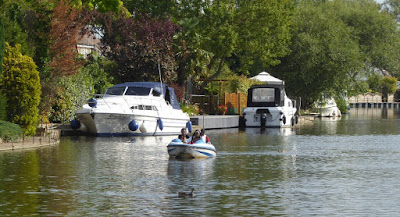 Many in the boats were obviously Jews; at Aqueduct Lock a group of them helped with the gates. I talked to them about lock operation and let the children wind the paddle up - under close supervision. Jan asked if she could take the photo; permission was granted. 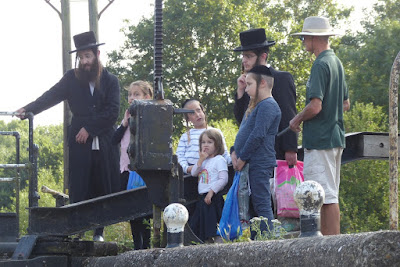 After tea we walked in to Waltham Abbey town centre and revisited King Harold's tomb. A lump of rock. (No photo - I didn't have my camera and it was almost dark anyway.)

Tomorrow I expect I'll be helping to put fencing up at the festival site.
Posted by Halfie at 22:38