Atherstone to Bedworth and Brownsover

Ah ha! I have now had the opportunity to fire up the laptop, connect to Jan's wifi hotspot and upload some photos. First, the old and new starter batteries (new at the top). 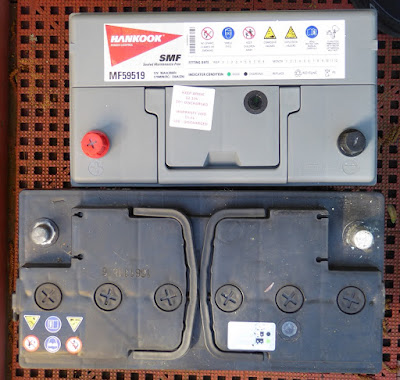 I got a Hankook MF59519 battery from Battery Megastore for £77.73 including postage. This claims 720 CCA (cold cranking amps - a measure of the "oomph" it can give to the starter motor) and a capacity of 95 Ah. The old battery, I discovered, was a leisure battery. The same as was in the domestic battery bank before I replaced them a couple of years ago. I'm hoping that the new battery will last a lot longer than the old one, especially as it is "sealed, maintenance free". The battery is in a very hard-to-reach place, which meant that I never topped it up. That's probably why it died.

Right, enough of batteries (for now).

This is where we tied up on Monday, between locks 8 and 7 on the Coventry Canal at Atherstone. 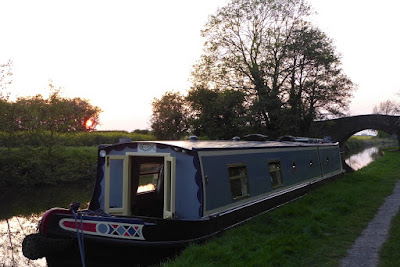 The trains were a bit noisy and woke Jan too early in the morning. We walked into the town, catching Aldi with just enough time before they closed.

The next morning, after our early-ish rise, we ascended the next two locks before Jan walked back to the high street for a hair cut, leaving me to carry on up the flight on my own. This is Lock 5, I believe. 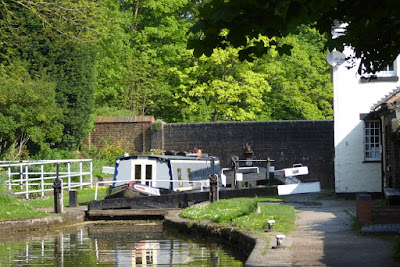 Could someone please identify these white flowers, seen by a bridge? 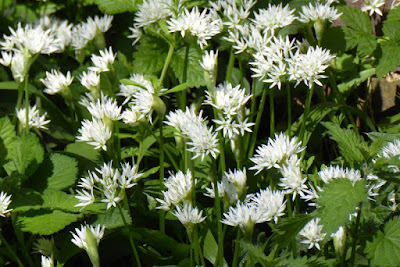 At Bedworth we stopped at our friends Terry and Christine's canalside house and were invited for a meal together with Stephen and Gwyneth who live nearby. Thanks for a great evening. Stephen was kind enough to drive me back to Fazeley to pick up the car.

This morning we walked up the road to Chopra's car spares shop for the fuel filters I need; at coffee time we set off towards Hawkesbury Junction. 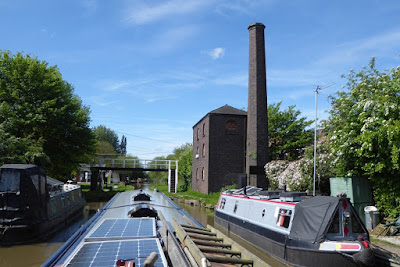 We are now at Brownsover, having turned left up the Oxford Canal.
Posted by Halfie at 19:18

Hi! We are at the top of Hillmorton Locks tonight, so the chances are we will pass each other tomorrow.

The flowers are Wild garlic Halfie.Quite a strong smell too.

Elsie, thank you. I didn't notice a smell - they were on the offside.