Thinking about where to go this year

For the last few years we have included the Crick Boat Show as part of our itinerary, but this year we shall be further south. The Boaters' Christian Fellowship has an event in Newbury in June, so we plan to do the Kennet and Avon. The only part of this navigation we have done so far is between Devizes and Bath, and that was on Shadow when it was based in Devizes one year. This time we'll be able to cover the whole length of the K&A from Reading to Bristol. We won't venture beyond Bristol as I don't want a mutiny.

Other canals I'd like to travel include a couple of arms of the Grand Union, the Aylesbury and the Slough Arms, neither of which we have explored before. As we'll be on the Thames anyway to access the K&A it would be good to do the Wey and the Basingstoke as well.

Today's photo is of the Thames in London nearing sunset. 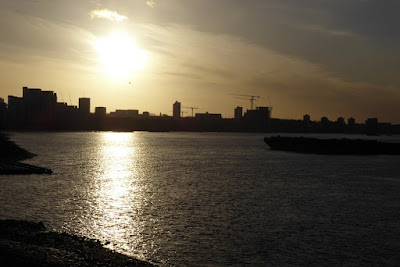 Do try the Wendover as well. Good night stop at the (current) end of the navigable length. Walk along the restoration also interesting.

Good luck with the K&A - we did it in 2015 and found it unbearably busy with moorings very hard to find. Such a shame as it is a lovely waterway. We did the crossing from Sharpness to Portishead with another boat and a pilot without any problems. We also did the Wey that year and would highly recommend it. If time allows buy the three week licence (it is either one or three) as it so lovely it deserves plenty of time to savour and enjoy it. Jennie, nb Tentatrice

Mike, thanks, we did the Wendover Arm a couple of years ago, including walking the unnavigable part.

Jennie, well, we'll have to see how we get on regarding moorings. Thanks for the Wey recommendation - we'll have to look into licenses.

You'll probably meet up with my brother again! :)