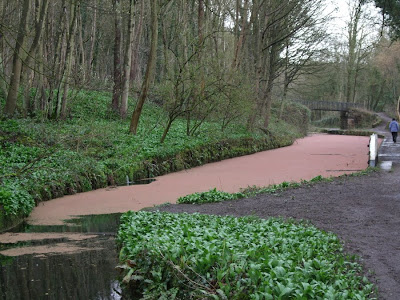 Until walking along the Cromford Canal I'd thought that duckweed could be only one colour, i.e. green. But here it was red! The photos don't do it justice: it looked a lot redder than this, like a freshly laid cycle lane (a red one, obviously). The duckweed had collected between two narrows, just in this section between High Peak Junction and Whatstandwell. 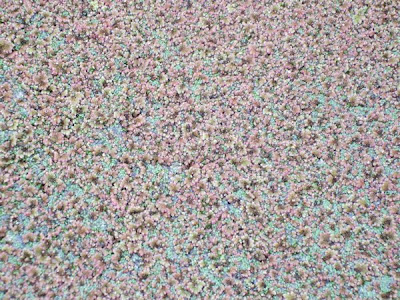 Its scientific name appears to be Lemna turionifera and, according to the Joint Nature Conservation Committee it was first recorded in the wild in England in 2007. The National Biodiversity Network forum gives this additional information:

It is described in the most recent edition of Watsonia (Vol 27, Part 2) and was an article published by R. Lansdown. In brief, Lansdown states that Red Duckweed was discovered in Dorset in May 2007 then Lincolnshire in July of the same year. It is a native of North America (yet another botanical species to become established from those shores) and northern Asia. Lansdown suggests that this species is overlooked in Britain. 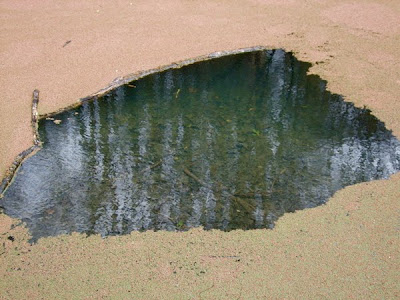 A couple of branches made this "hole" in the duckweed: you can see that the bottom of the canal here is very close to the top.

This is the more usual colour of duckweed, seen here on the Shroppie near Ellesmere Port in 2005. The close-up photo looks like a colour blindness test, doesn't it?
Posted by Halfie at 18:30

You're too fast for me. When I saw the close-up photo, my first thought was, "Hey that looks like a colour blindness test." Had a good laugh when I read the end of you blog. You beat me to the punch.

That looks more like what I know as duckweed too, Halfie. The pink stuff looks a bit twee and incongruous!

The reddish plant looks like Azolla. Note the edges are not smooth like the duckweeds. Its actually a floating fern.